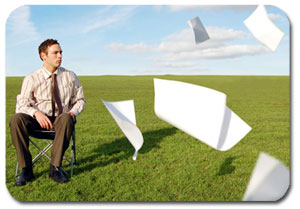 It’s almost 2007, and my mind is racing. I’m scrambling to think of some goals and resolutions for the new year. The pictures start to appear… a new job in an office with an ocean view… maybe a new car… how about that house on the hill… hmmm? If I send out my resumes today and start putting aside $100 a week, it shouldn’t take too long… maybe I should call the Realtor.

Hmmm… what about that book I want to write, how about that new business club just starting.?? Jared just called and wants me to check out his new multi-level marketing plan… and my wife’s best friend just got her new Mercedes from selling Arbonne… Gotta start something quick… Hmmm… I can pick up that new suit I’ll need on sale today… I better look at some new furniture for those house parties we’ll be having… uh-oh… I better lose 10 pounds before I get the suit… where is that weight-watchers number??..

We’ve all been there. The dreams come fast and furious and sometimes the spoils come before the process. Credit card companies love this time of year. Before we get too carried away (and have the credit card bills to prove it) lets take a step back and look at 5 reasons the scenario above won’t work…

1. The number one reason goals are not accomplished is that they are NEVER written down. Plain and simple, if you write your goals down on paper you are much more likely to accomplish them. There are some amazing statistics that say that only 3 percent of the population will ever write down their goals. And this is the same percentage that will actually achieve them. In the scenario above, everything is in my mind. There are phone calls to be made but nothing is said about actually writing anything down.

2. The jumble of things above illustrates another reason that goal setting doesn’t work for many people. There are just too many goals! If you actually tried to accomplish the things on this list you would be spending many hours everyday in this pursuit. Most people have real jobs and finding even an hour a day is tough. The reality of how long something actually takes is a killer of so many lofty goals.

3. The fact that there was nothing specific about any of the items will lead to a very cloudy picture. What kind of car are we talking about? Just where is that house? What am I really doing on that job and how long was that commute? The clearer the picture, the more likely the goal will be accomplished. Dreams are cloudy, goals need to be in sharp focus.

4. One of the things about the scenario above is actually looking at the reality of the picture. Landing that incredible waterfront job will take a lot more effort than sending a resume. That house on the hill will actually require two incredible salaries to be able to make the payment. The fact that the new car actually costs $30,000 over 5 years instead of the $22,000 price tag may have some bearing on the bottom line. Goals need to be realistic.

5. While the list above has some great sounding stuff in it, there really is no Big, Hairy, Audacious Goal. If we took one of the items on the list and focused on it and wrote down the steps it would take to get there, we might have something. With so many vague, competing goals we actually have set our bar way too low. Only goals big enough to inspire us one, five, or ten years down the road will work here.

Usually around the first week in February this whole house of cards usually comes crashing down. Those lofty sounding goals evaporate into thin air and reality takes over. The daily grind comes roaring back and another shot at really making a difference in our lives is gone for another year… maybe next year… hmmm?

Does it really have to be this way?

Over the next few days we’ll look at some simple systems for goal setting that anyone can do. They don’t require a PHD, just some simple tools and 48 minutes of your time.