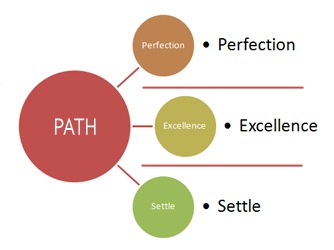 In our last post we talked about starting great and then making it better. The idea is to put aside perfection and instead choose something great to start with. Once you are started on the path, make improvements along the way. Here is a simple diagram to show the direction that leads to success. 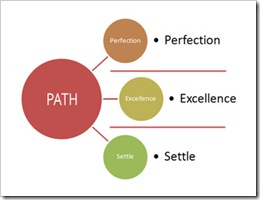 If we choose to aim for perfection, chances are that we will stall out at some point. Perfectionism is a trap that can stop the best laid plans.

On the other hand we don’t want to be complacent and settle for the status quo. The old saying, “Good enough never is” is one that rings true over time. If we are not willing to make improvements along the way, our product or service will die a slow death as the world slowly changes around it.

The strategy that will produce the best results is to aim for excellence. Excellence is defined as…

Excellence is a habit that we can learn from. As Aristotle once said…

“We are what we repeatedly do. Excellence, then, is not an act, but a habit.”

Some other quotes sum up the idea of excellence…

“Striving for excellence motivates you; striving for perfection is demoralizing”  Harriet Beryl Braiker

“Anyone can be an ACE: Attitude + Commitment = Excellence”
Robert Inman

“Excellence is to do a common thing in an uncommon way.”
Booker T Washington

A great book on the subject of Excellence is Good To Great by James Collins. This is an inspiring book that offers a well-reasoned road map to excellence that anyone would do well to consider.

To put the idea in a sentence…