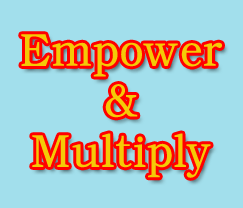 In our final look at the book Becoming a Person of Influence by John Maxwell, I would like to look at the last two chapters. Chapter 9 is entitled empowering people and chapter 10 is reproducing other influencers. John lists four qualifications of an empowerer. They are…

To engage people to  help them reach their potential you need to evaluate them on their knowledge, skill, and desire. When you know where they are, you can model for them a direction to excel in. Using the analogy of a mother bird and her babies, people need to know what it looks like to fly. As a mentor, you have the best opportunity to show them.

Model the flight and work ethic you would like them to embrace. Expect people to succeed! Be sure to verbalize it and reinforce it. Once people understand that you genuinely want them to succeed, they will begin to believe that they can accomplish what you want them to do.

Once they are ready to proceed, transfer authority to them. That includes sharing both your authority and influence with the people you are mentoring and developing. When you begin to empower other people, give them challenges you know they can rise to. This will help them be confident and give them a chance to experience their new authority and learn to use it more effectively.

Once they have taken the reins and they have shown you their ability to complete the task, publicly show your confidence in them. Give them the credit for a job well done. Be sure to give them positive feedback. Don’t dwell on the negative and be sure to include constructive ideas along the way.

Once they have taken flight, release them to continue in their own. Give them as much freedom as possible. In conclusion give authority, responsibility, and offer needed assistance along the way.

John makes the point that the benefits of empowerment are very high. Empowerment helps people become more confident, energetic, and productive. It also has the ability to improve your life, giving you additional freedom to promote the growth of your organization.

One of the most incredible stories of empowerment that I have witnessed is the story of Kathy Gaulton. Kathy worked in the business world for over 30 years in retail management. In 1998 she took a short term missions trip to Tanzania, Africa, where she witnessed poverty and a community of people who desperately needed help.

Kathy had the idea of having the local people make drawstring bags from local fabrics. She took 5 treadle sewing machines which were idle and gave the local people training on them. Soon the machines were whirring away and within two days there were 300 completed bags that could be sold.

The people were really excited and Kathy realized how far a little training and some local materials could go to empower the local people to become self sufficient. Through this simple beginning came Heavenly Treasures, an organization that empowers impoverished people and communities all over the world to break the cycle of poverty through micro enterprises.

From the Kip Karen Krafters in Kenya to the Dorcas Design Team in China, Kathy’s seeds have sprouted in a big way. Amazing products are being turned out by the thousands and people’s lives are being changed.

These livelihood projects help reproduce other influencers. Once people become self sufficient they can teach other people the same skills. Soon the more skilled workers become leaders and the process repeats itself. Some of these onsite leaders have gone on to create new enterprises in other areas of the world.

Organizations like Toastmasters and Rotary International can help you learn the skill of empowerment. In Toastmasters it is not uncommon to see amazing transformations. All it takes is a caring person with a vision along with an unselfish passion to help others succeed.