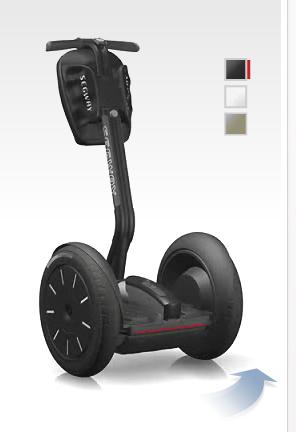 Have you ever had a dream where you could fly or glide through the air? In my dream it’s almost effortless. You just point where you want to go and you zoom off in that direction. Flying through the air with the wind blowing past your face.

My wife and I were in Santa Barbara this week for a short vacation. We stayed in one of our favorite places, the Cheshire Cat Bed and Breakfast. This is a wonderful Victorian residence, designed around an Alice in Wonderland motif. It’s one block off of State street, and a great place to discover the city.

One of the packages they offered this year was a two hour Segway tour of Santa Barbara. We had booked our stay with a restaurant package including dinner at Downy’s and lunch at Louie’s Bistro (delicious mesquite broiled meatloaf), but the Segway tour sounded intriguing. On the second day of our stay we called up Segway of Santa Barbara and signed up for their 2 and a half hour Old Santa Barbara Tour. 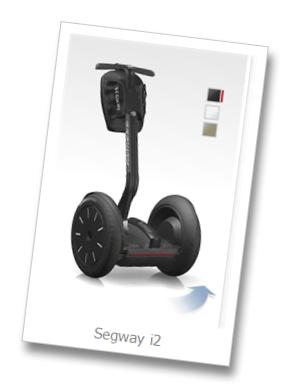 We arrived to find a small business across the street from the Santa Barbara pier. they signed us up, provided helmets and took two Segways outside to start our tour and Segway lesson.

Bill was our tour guide and he took a few minutes to familiarize us with the Segway i2 personal transport. He showed us how to power it up with the wireless controller and how to step on the self balancing device. At first my wife and I were both a bit wobbly, but we soon caught on to the controls.

The Segway is very intuitive. You lean forward to go forward, you lean back to stop. You use the handle bars to turn. The built-in gyroscope keeps you magically upright and balanced.

Within minutes we were zipping around the parking lot and doing a quick slalom around some cones. We practiced entering driveways and going up and down hills. The Segway soon became almost second nature. This is one amazing machine.

Once we were able to do the test course with ease, Bill had us follow him as we set off for the city tour. We headed out on State Street and rode down the sidewalks with ease. Since the Segway is classified as a pedestrian instead of a vehicle, we could go almost anywhere on the unit that we could walk. 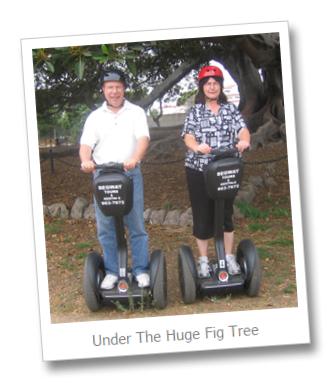 We were soon zipping past the train station and soon found ourselves under one of the largest trees in Santa Barbara. Bill was an amazing tour guide. He reminded me of a laid-back Indiana Jones. Someone who was incredibly knowledgeable of the history of Santa Barbara and always up for adventure.

And adventure we had… over the next 2 hours we saw more of Santa Barbara than we could have by any other means. We toured many of the downtown streets and drove through a couple of parks. We went down a dirt path to view a Koi pond alive with fish and turtles. We parked the units outside a downtown museum, and Bill gave us a locals-tour of the museum. 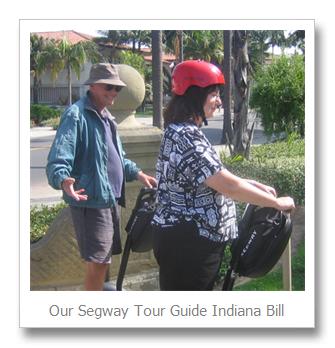 Bill had so much trivia and local knowledge it made the history of city come alive. From the early Spanish influence through the Chinese settlers, up to a modern multi-cultural city, Santa Barbara is fascinating.

As the tour wound down, we headed back to the pier at a quick 12 mph pace. The Segways maneuvered through the streets with ease and as we pulled up to the shop after two hours on the machines, we found they still had almost a full charge.

I was blown away by the Segway experience. I haven’t had so much fun in years and now I really would like to own one. With gas over $4.25 a gallon here in California, the electric powered Segway would be a great alternative for short trips around town.

Priced around $5000 and very reliable, this may be the future of urban transportation. It’s certainly the most fun you’ll have commuting!