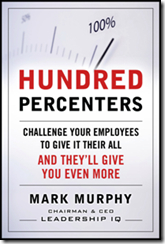 As the year is winding down it’s time to think about goal setting for the new year. I like to set goals and have found that setting HARD or BHAG goals to be much more fulfilling than setting very specific SMART goals.

As I have been reading the new book by Mark Murphy, entitled Hundred Percenters, I have come to some simple conclusions about my goal setting ritual. When setting a goal, it needs to be a “Want To” goal. If I make it too specific, it becomes a “Have To” goal.

Let me give you an example.

I love to blog and interact with an audience. When I sit down at my computer, I usually have a relatively blank slate. But things in the news, other people’s blog posts, and the general feeling of the day usually lead to a post idea rather quickly.

But if I set a specific goal to write 500 word articles on Tuesdays about goal setting and I publish this fact on my blog, I’ve just created a “Have To” goal. For example, it’s Tuesday and I have to write a blog post about goal setting even though I just found out that one of my mentors has just launched an updated blog.

I want to write about the updated blog, but I’ve promised my readers a post about goal setting. I only have a limited time to write, so I begrudgingly write a cookie cutter post about goals. I don’t like the process and the post is mediocre at best. And worse yet, my mentor’s site goes unmentioned.

Has this happened to you?

I’ve found that making things too specific and telling other people about it leads to problems. It never fails that something gets in the way and I have to back track on a promise.

It’s not that I don’t set goals… I have a full cadre of them. But I’ve learned that leaving them somewhat indistinct leads to more fun and the goals actually getting completed.

Last year, I set about writing a book. I had a loose framework and set a far off goal of having it completed in a year. I created some characters and put them in a familiar location. That is where the fun began. Every day was an adventure. I started writing and my characters came to life. I was never sure where they were going, but at the end of my writing session new places were discovered and new interactions happened.

Had I created all my characters and places up front may have ruined the whole thing. I did have a daily writing time set aside, but not a specific word or chapter count for the day. As my writing went on, my goals became a little more distinct as I saw how fast things were progressing. I set a mid year goal of having the book written and edited. This left me the rest of the year for publishing. This gave me an incentive, yet left the project in Want To mode.

While certain goals need to be “Have To,” try leaving your really big ones in “Want To” mode.

I would love to hear your experiences on this.