This is a guest post by Sarah McGaugh. She is a teacher, entertainer, four star general, and nurse: in other words, a mom. After many years of a fulfilling career as a high school English teacher who loved being in her classroom with her students, she now stays at home to home school her two young children and also works as a freelance editor. Her philosophy is simple: find the magic in the ordinary, laugh whenever possible, and embrace the joy that was meant for you. You can read more from Sarah on her blog, Bird in your Hand.

In the fall of 2003, when I was a first year teacher who had both the advantage and disadvantage of knowing hardly a thing about teaching, I met Mike. A seventeen-year-old junior in my English class, Mike wore a thick black hooded sweatshirt everyday, even in the desert weather of mild-to-scorching Temecula, California. He kept the hood up, close to his face; even so, it was hard to miss something of those eyes hiding behind the cascades of curly long hair that he wore like a veil. Mike shuffled his way to and from class, head down. Never a disturbance, the worst of his behavior was maybe a doze or two in his class before lunch.

When I think about communicating to connect, I think about Mike. I still remember where he sat in our class of thirty-seven students. I remember that he was on the verge of not graduating from high school due to his underclassman grades. Just twenty-three years-old and new in my teaching career, not yet married, not yet a mother, I knew only a couple of truths for sure: 1) I must never ever show my students that I had any fear of them and 2) I must do everything I could to connect with them if I had any hope of teaching them authentically.

So while I made rookie mistakes like assigning way too much reading for homework or occasionally letting students pack-up before the bell, there was something I did do right that first year: I greeted every student, every day, by name and with a smile, at the door on the way into our room. It didn’t matter that Mike never looked at me when I said his name the whole first term. Every day he received his greeting, “Hi, Mike” or “Good morning, Mike.” My smile for him was there, whether or not he saw it, waiting for him to come claim it.

Raised by decent folks, I internalized my parents’ message from an early age: be sincere in your words and actions, embrace hard work, and mean what you say. When we speak or when we write, we can hear that sincerity in our innermost selves before we even offer a word. That sincerity resonates like a clear bell in each of us. We have to believe our message before we can ask others to believe.

My message to Mike was a simple “Hi.” It was not a highfalutin word. No one would see it on the SAT. It isn’t the first word that comes to our minds when we think of emotion, or writing with pathos. Yet all the power of that word came from how, and when, I chose to use it, and with what tone. The credibility and emotional overtone of that simple word grew with its repetition. Every day, a simple greeting. And every day, a symbol to Mike that I was not about to give up, a symbol that I was rooting for him.

By the second term, Mike acknowledged my daily greeting and speaking of his name with a head bob—you know, that kind of head bob particular to seventeen-year-old boys. He still wasn’t speaking much, but he was doing enough work to stay afloat in the class.

Then, toward the end of the year, we read The Catcher in the Rye. In a blog post about the power of words, I cannot mention J.D. Salinger’s work without celebrating the intellectual and emotional reaction this novel stirs throughout the world. Whether or not a reader can stomach the profanity and slang in the novel, we must yet agree that Salinger was a master of powerful word choice, of diction that ignites the passion of his reader. Few people have a neutral reaction to Catcher.

It turned out that Mike loved The Catcher in the Rye, although I didn’t know the extent of this until a few weeks after we’d finished it. A library notice came to class one day for Mike. His Catcher was overdue. I asked him about this, and he asked with a quiver in his voice, “This is my favorite book. What do you think they will do if I keep it?”

I went out that afternoon and bought another copy of The Cather in the Rye; the next day, it was waiting for Mike on his desk with a note telling him that this copy was his and that he could turn his borrowed one back in to the library. 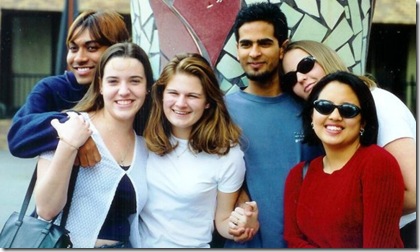 From that day on, Mike returned my greeting every day, “Hi Miss Matics.” I’ll never know for sure if it was my unadorned “hi” each day spoken in the wide-eyed belief of a young teacher that all people are decent and worthy of notice, or if it was Salinger’s words in Catcher. Or perhaps some combination of the two. Somewhere in between the sound of tennis shoes shuffling along the wooden ramp to my classroom door and the sound of the final bell ringing for the year, words given and received with sincerity had connected us.

Question: How do you communicate to connect?