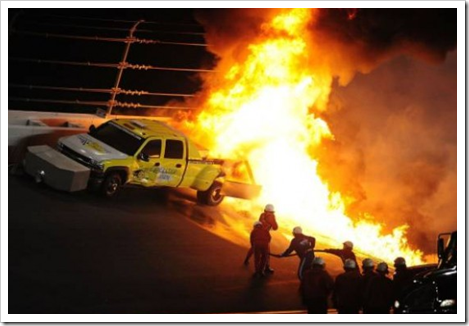 I’ve been a fan of the social media network Twitter for some time now. I love the instant communication features and the ability to direct traffic to my blog and other social media sites. Over the past two years, I’ve slowly built a following by adding influential tweeters to my follow list, and engaging in conversations across the Twitterverse.

What I’ve found is that my follow/followers ratio stays about the same. If I have a post picked up by an influential tweeter my list of followers goes up, but for the most part, my ratio stays about 1 to 1. To find influential people to follow, I use Klout as a guide. I did a couple of posts about this a while back, and it really works well to connect with like minded people.

While I’ve seen certain influential people add followers quickly, I’ve never witnessed anything like what I saw the other night on TV. I was watching the rain delayed NASCAR Daytona 500 on TV Monday night, when out of the blue, drive Juan Pablo Montoya hit one of the jet dryers on the track during a caution. His car was instantly destroyed, and it set 200 gallons of jet fuel and the pit truck on fire. The race was immediately red flagged.

Driver Brad Keselowski was parked in his car with the other drivers some distance from the fire, but with a unique view that no one else had. Brad had secretly brought along his iPhone and started tweeting messages and picture of the fire out to his fans. Soon the tweets were going fast and furious. The Fox broadcasters soon picked up on this and put a screen link to Brad’s twitter name @keselowski .

With millions of fans watching on TV and over 100,000 fans at the track, Brad’s Twitter followers suddenly started to increase. In the two hours that the race was red flagged, his followers increased from 71,174 to over 192,000 when the race restarted. The New York Times gives a play by play in a very interesting article on what actually happened as his followers literally exploded in just a few minutes..

It seemed like there were three things at play here

1. Being in the right place at the right time during an exciting event

2. Having alternate media (TV) giving out his Twitter address

Even after the race, his followers continued to climb as people read the reviews and links online. He currently has over 223,000 followers today.

This really brings up different situations that we may find ourselves in. Tweeting from ground zero of an earthquake, tornado, or other disaster would give your followers a birds eye view of the event. You might be sitting in the audience of a show or concert and have unique insights that others would be interested in. You might be witness to a crime that others need to know about.

Having Twitter on a cell phone with a camera, may make you the next reporter on the scene.