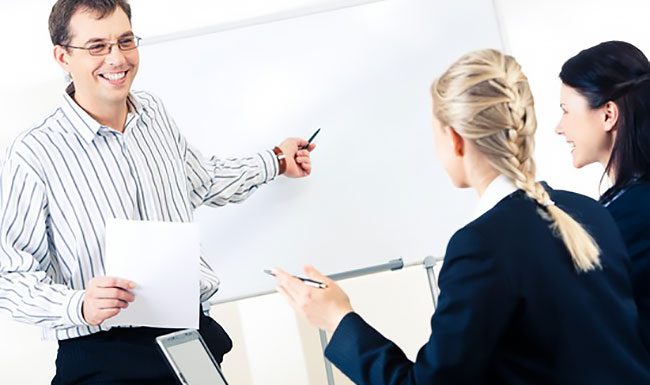 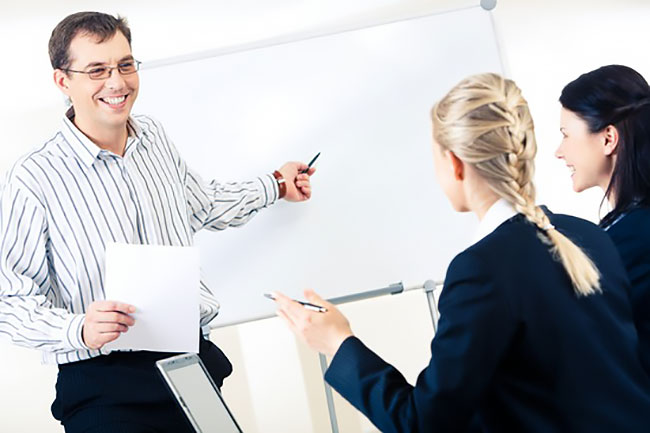 As a software trainer, I speak to a wide variety of audiences, usually in a half or full day class. Some are small, more intimate groups of 10 to 15 people, while others may expand out to 30, 40 or even 50 people in a room. Each has their own dynamic, and many times what works for one type of group is impractical for others. Recently I have been training an overview course of a new web based software upgrade that has been very popular with many of my local school districts. As I have arranged training with their IT departments, the CTO’s would invariably want to maximise their class size.

I’ve recently faced large computer labs filled with Chromebooks with over 40 administrators, office personnel and teachers unfamiliar with the operation of the laptop units, especially the trackpad. Since my training is hands-on, this usually slows the start of the class as we have to get everyone logged in and ready to go. Large classes like this are a challenge, and the pace usually slows as the strange trackpad interface can produce unfamiliar results. Add to this the overload on the wireless bandwidth, and many times the whole class has to wait for screens to update. If my training computer is on the same network, I’ve had my screens slow and crash.

That being said, I’ve found some helpful solutions that have totally changed the dynamic of  the large audience training. I’ll cover these in a series of future posts. But today, I want to cover how this overload had changed a key dynamic in my training style, that caused some unintentional results. What was strange is that I hadn’t noticed the difference, until I took another trainer’s class last week at a software conference.

It simply comes down to this. As a speaker, I’ve always found audience interaction to be the number one key factor in how a speech, presentation or training comes out. If you lose the audience, you might as well go home. What had slowly happened to me was losing the conversation with the people sitting right in front of me.

I had started lecturing, trying to maximise class time, but quickly losing the rapport with my audience.

The really interesting effect of lecturing, is that people tune out. They become bored. They start checking email, talking with their neighbors and basically start clock watching for an escape.

How do I know this? Because I do it all the time. Unless the teacher is involving me in the training process, my mind is somewhere else.

Last week, I was training at a large, two day software conference in Ontario, California. With over 1100 people attending, the event had a wide variety of classes and many different trainers. Out of the eight sessions, I was teaching in four of them, two individual classes each day. The other four were spent in our open forum lab or monitoring other training classes.

I had a chance to sit in for a while on two popular classes the first day. Both teachers were accomplished educators, but because of time constraints, and large audience size, were sitting behind a monitor at the front of the class, going through the motions of moving a cursor around the screen, explaining how the software works. They lost me pretty quickly. Without eye contact and interaction with the audience, my kinesthetic learning style tuned out. The interesting thing was, the audience was quiet and asked few questions. Overall the training seemed to be well accepted, but I wondered how many people walked away with a good understanding of the software.

My two training classes went well the first day, but my smaller class had basically become a lecture. I had very little audience participation. People were nice, but there seemed to be a huge disconnect. As the second day came, I was dreading doing my smaller class again. It was training on a state mandated test that the requirements had kept changing. Not a real exciting subject and one that had a lot of tedious details. To top it off, it would be the last class on the second day. I knew my audience would have one thing on their minds… going home.

I figured I would just plow through it and get everyone out early.

That was my attitude, and I didn’t feel very good about it, but I didn’t know what else to do.

That was until my fellow trainer, Jim, changed all that.

Jim Morrison is a long time educator, having been a teacher, administrator and an IT director. I just happened to wander into his class after lunch on the second day. He was teaching a group of counselors about some of their specific applications of the software.  Counseling apps are notoriously tedious, and counselors sometimes can be a very serious bunch. I figured it would be an after-lunch, sleep fest.

As one o’clock rolled around, Jim introduced himself to the small group of 15, and then started his magic. He started working the room. He went around and had everyone introduce themselves, asking each of them their specific concerns about the software and their jobs. Then he started an interactive conversation between the group, making the training session more of a mastermind than a boring lecture. The audience came alive. As he showed different screens in the counseling apps, he would ask open ended questions, evoking lively responses.

I couldn’t believe how something so inherently boring could be made so interesting. He started calling on some of the true innovators in the class, and had them explain how they ran their programs. Incredibly helpful techniques were discussed. We all were learning some real world applications that I’m sure very few people in the class had heard of before. He called on me a couple of times, pulling out my expertise with the new software.

He had expertly introduced group-think in the classroom, guiding everyone along, but letting everyone interact. It was truly a magical experience.

After 80 minutes I came out of that classroom energized, and with one thought on my mind.

I needed to involve my upcoming class in the same manner.

Taking Jim’s lead, I walked into my testing class for the end of day session, and started interviewing my members before the class started. I found out names and a little about each person. That started the magic. The audience took it from there. As the class started, I had everyone introduce themselves and share a little about their individual experiences with the testing software. The interaction started.

Members would ask other members specific questions. As my presentation started, I would ask for feedback after each section. This time, instead of blank stares, I was getting feedback; powerful and instructional feedback. Here was a group of fifteen people who worked with this software all the time. They had real world experiences that I would never have as a trainer.

Here is the incredible thing. I was learning a whole lot about our software that I didn’t know before. I found out what they liked about it and some items on their wish list. As the program went on, I started taking notes. People started sharing stories of their student experiences. I found out how different districts administered the test. We all learned some valuable information.

When the class was over, the attitude was upbeat. Even though it was the end of the day, people were sharing contact information, asking questions, and some of them even decided they wanted to see a new beta interface over in our lab.

It was one of the best classes I’ve ever been involved with.

All because I took Jim’s advice, stopped the lecture and brought my audience into the conversation.

Such a simple change, yet one that made a profound difference.

One that I had put aside for the sake of expediency, but one I will never take for granted again.

Interactive training with your audience is one of the best ways to insure your presentation is a success.

Question: How have you involved your audience in your presentations?