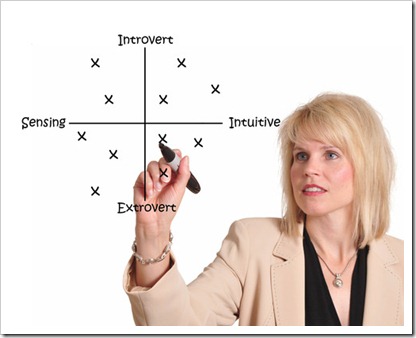 I took a personality test years ago that told me that I was an Introvert. It meant that I liked to keep to myself, and that I was quiet and shy. The worst thing in the world for me was to throw me in a group of people at a party, or heaven forbid, put me on stage and ask me to speak publicly.

While the test was partially correct; I tire easily at party’s and other social events, it was way off in other areas. For instance, I love public speaking. Put me on stage in front of a group, and I’m right at home. I also was in outside sales for over 5 years and inside sales for almost 10. While selling was stressful at times, I did pretty well at it.

So… where did the test go wrong? It turns out, when I looked at the actual test results and dug down into the data a little ways, I was almost right in the middle. I was one tick towards the introvert side. Unfortunately, when you take these test results and extrapolate them into other areas, there is no middle ground.

When I looked at my personality profile and did a career assessment, sales was at the bottom of list of jobs I should consider, followed only by professional speaking, according to the prevailing research. But… I was good at sales. I liked to speak in public.

It wasn’t until yesterday that I figured out what the discrepancy was. It turns out, through a simple 5 minute test that I’m a… Ambivert.

Yes, a new classification, but one that has actually been around for years. It wasn’t until I read Daniel Pink’s insightful blog post that I realized what the problem has been all these years. I was tested and encouraged to take on a career for someone who was a true introvert. As my job opportunities opened up, I took on the introverted tech guy role. The guy they say you should lock in the server room, and not let out.

But now I find out that that wasn’t the job for me… not at all.

According to Dan, I should of continued on in sales. Look at this chart. 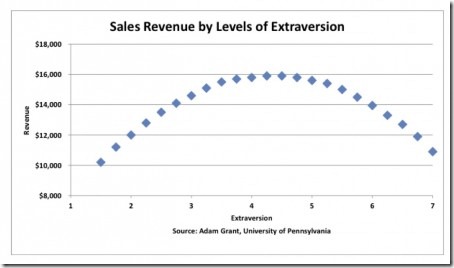 So, if you are looking for a new job, and your career counselor says you are an introvert, do yourself a favor and take Dan’s quick ambiversion test.

If it turns out, like me, that you are an ambivert, you should add sales and marketing to your list of recommended jobs. You should sign up at your local Toastmasters club, and learn some presentation skills, and then drop by my friend, Anthony Iannarino’s sales blog, and get some specific pointers in the art of selling.

Then you need to get Dan Pink’s new book, To Sell is Human, and spend a few days learning how to motivate and encourage others. 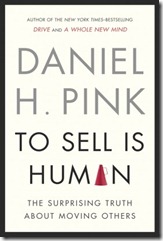 Don’t miss out on the career of a lifetime, just because you are labeled an introvert. Find out the truth and prosper! Take the Ambivert Test.

Question: How did you score on the Ambivert Test?