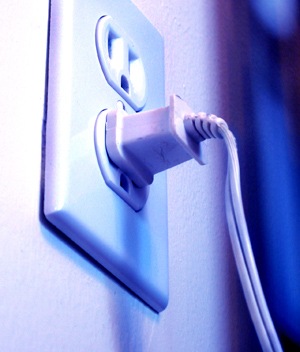 Ever since I was a kid, I dreamed of creating an electric car. One that you could plug in and drive to work or school. One that would let you bypass the high prices for gasoline (26 cents a gallon when I was a kid!). Over the years this dream has come closer to reality but with unfulfilled promises by manufacturers every decade or so. 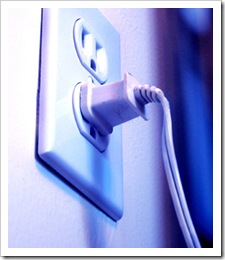 It has always been a problem with batteries. The lead-acid units we have used for so many years in our cars, just don’t have the capacity to make an electric car feasible for most people. The range is too short and the weight of the batteries too high.

Technology has changed in the last few years and we are now seeing a wide variety of gasoline-electric hybrid cars on the market. These cars use a medium sized battery and a gasoline engine to provide power and charging capacity. Electric power is used at low speed and the gasoline engine comes in seamlessly at higher speeds. It is a marvel of modern technology that they actually work, given the complexity of the hybrid gasoline-electric power plant.

Many hybrids are currently using Sealed Nickel-Metal Hydride battery technology which is an improvement over lead-acid technology. Battery manufactures are now pointing to Lithium-ion technology (Like the new batteries used in laptops and digital cameras) as the next wave of power storage. There are many variations, but the main hurdle to mass production is overheating and fire (remember the laptop batteries that caught on fire).

One of the current battery technologies that is available that has overcome this problem is Lithium-phosphate batteries. These offer extended capacity without the danger of overheating. Once the Lithium-Ion technology is refined we’ll see even greater capacity.

With the advent of these newer batteries, inventors and entrepreneurs are scrambling to bring electric vehicles to market. I went online and found two companies that are coming out with vehicles that may actually live up to the promise.

The first is an electric motorcycle from Brammo Motorsports. The bike is called the Enertia Bike and is powered by multiple lithium-phosphate batteries mounted to a low weight aluminum frame. The bike has no transmission and is simply a computer controlled battery power supply and an electric motor. This simple setup results in low weight and a slim design. 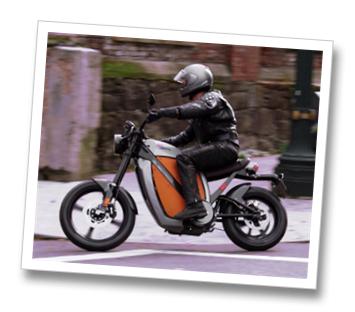 The bike has a range of about 40 miles and a top speed of 50 miles per hour. A two hour charge time will have you back on the road. Given it’s limitations it is being marketed to urban inter-city commuters that don’t have to travel on freeways to work.

With a price tag of over $11,000, the market for this bike will be somewhat limited but there are some people that may want to be the first to actually own a plug and go motorcycle.

As battery technology improves, the range and speed of this motorcycle will increase, but for now it actually works and you can pre-order one today.

The second is one of the coolest cars I have ever seen. It’s a cross between My Favorite Martian’s Spaceship and a Cessna airplane. It’s called the Aptera and is based on a unique three wheel design with an all electric or hybrid power plant. 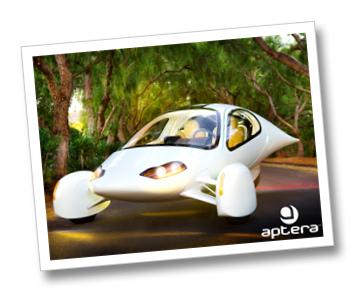 When production begins in late 2008, the unit will be powered by the latest battery technology. Currently the prototypes are powered by Lithium Phosphate batteries which give an all electric range of about 100 miles. The hybrid gas-electric model has a small gasoline engine to recharge the batteries and will provide fuel economy of over 200 miles per gallon.

Given its three wheel design and size, it is actually characterized as a three wheeled motorcycle. This puts it in a range of vehicles that don’t have to meet the stringent safety and environmental challenges of automobile manufacturers. This allows the company to actually produce a viable electric vehicle at a price point that most people can afford.

The company hasn’t scrimped on safety features though. They have included airbags and have crash tested the prototypes. The Aptera has fared very well in the tests.

This vehicle will be produced just for the California market right now and is designed as a super commuter car. With a target price of under $30,000 there will be a huge interest in the Aptera. The factory is in Carlsbad California and soon we will be seeing them on the road throughout Southern California.

I can’t wait to test drive one of these. The hybrid model would be wonderful for the long commutes that many of us have and being able to plug it in and go would fulfill a dream I’ve had for a long time. Aptera means wingless bird in Greek. Even without wings, this unit will fly off of the showroom floors!

Check out the pre-production video here.

In the meantime, this car makes a great wallpaper on my computer!