I just returned from a week’s vacation and a two day seminar in the Pacific Northwest. The trip was fun and I had a chance to spend a few days with my 18 month old grandson. While the drive from Southern California was a long one, the experience was well worth the time.

The seminar was called Storyline and is based on Don Miller’s bestselling book, A Million Miles in a Thousand Years. I read the book a year ago and I knew that this seminar would be different… it would be an experience. The seminar lived up to expectations.

The seminar was held at the Armory Theater in downtown Portland, Oregon. The theater was right across the street from Powell’s Books, the largest bookstore in the world. Portland is an eclectic town with an amazing diversity of people. When you first drive in, the narrow one way streets can be intimidating, but once you park and head out to the street, the city comes alive.

My wife and I arrived on Monday afternoon and headed out of the parking garage for the Mark Spencer Hotel, where we would pick up our materials. As we walked along the gritty sidewalks, the sun was out and we found our bearings. We neared the hotel and were welcomed by @MichaelHyatt, @GailHyatt, @KimtheBruce and @JordanRGreen. We had met Michael, Gail, and Kim back in March on the ReCreate Cruise, so we felt right at home. 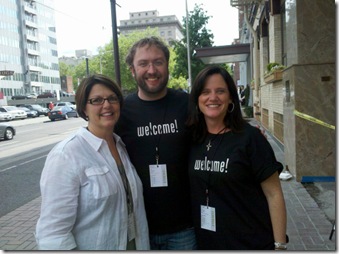 As we entered the hotel, we were led to the basement where our paperboard notebooks and name badges were held. Everyone was wearing tee shirts with helpful messages on them. We picked up our supplies, and spent a couple of hours discovering downtown Portland. The city was nicer than I expected. As the clock rolled around to five, we entered the theater and were pleasantly surprised. The interior was decorated in chrome, brushed aluminum, and concrete, offset with vibrant colors. We walked into the auditorium and were greeted with a living room setting recreated on stage. We took a seat, and waited for the experience to begin. 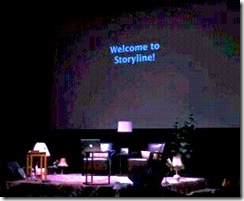 Suddenly the room lights dimmed, and a black PowerPoint slide with the words “Welcome to Storyline” appeared. From the back of the stage, Don Miller emerged, dressed casually in Jeans and a canvas shirt. His signature smile lit up his face. He welcomed everyone and had us open our notebooks to get started.

We spent the first night discovering what story is and hearing examples from Don’s life. He took us through the elements of a meaningful life, gleaned through the story of Joseph from the Old Testament. It was a reflective time…

The workbook asked some foundational questions…

He then has us do an exercise…

Name three people you know who inspire you the most and list the reasons why.

The first night ended in a preview showing of the new movie, “Blue Like Jazz,” which is based on Don’s book by the same title. Ignoring some minor technical glitches in the preview, the movie was well made and awaiting final editing. I think it will be popular, just like the book was.

The second day had us dig a little deeper to find out who were are, what we want, and write down a compelling story going forward. The reflective assignments were thoughtful and thorough. To richen the experience, Don had four guests come up during the presentation and talk about their own stories.

The conference ended with some blanks in the workbook and some homework to do. Overall it was an amazing experience. If you get a chance to go next year, make sure to include it on your to-do list. In the meantime, you can pick up Don’s book, Michael’s life plan, and start creating your own unique story.

Question: What story do you want to create?