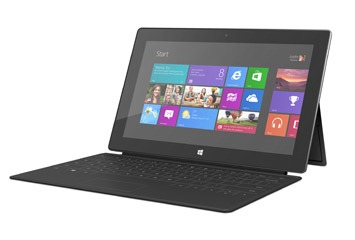 I had a chance to visit the new Microsoft Store in the Fashion Valley Mall (San Diego) last weekend. I wanted to upgrade one of my older PC’s from Vista to Win8 and thought I would visit the store and see the operating system in action. I had heard a lot of conflicting things about the operating system and wanted to go hands on with the new Microsoft Surface Tablets.

As I walked up to the store, I noticed it had a nice bright façade. As I walked in, I was astonished… 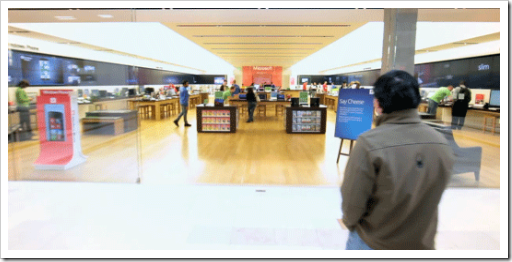 It was almost a total rip-off of the Apple store. From the table setup, to the technology displays, and all the way down to the lanyards the employees wore around their necks, they were almost identical to the Apple guys. The main difference was a video wall that surrounded the store that was bright and changed often (A little distracting at times).

If you closed your eyes, and walked in, you would really have a hard time figuring out where you were. As I walked in, I went up to the table front and center where the new Surface Tablets were… 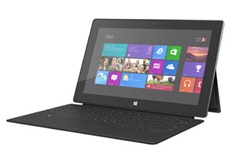 Here again, nothing really original. The Surface Tablet looks like an iPad with a Smart Cover (The actual tablet shape looks like a Kindle Fire). The difference is, the Microsoft cover is rigid and becomes a keyboard when opened. This seemed like an interesting idea, but it became a major problem very quickly.

As we talked with a couple of the sales people, my wife and I were invited to take a Windows 8 introduction workshop. Since my wife would be using 8 on her PC, we decided to sit in on it.

They took us back to a small presentation area in the back with a large screen and classroom style tables where they provided us each a Surface Tablet to follow along.

This was actually pretty cool… until the class started.

As we tried to follow along, neither of our keyboards on the tablets worked. The instructor swapped them out, but they still did not work. She said the units probably needed to be rebooted, but didn’t have time to do that. Without the keyboards working, the tablets were very difficult to use.

After going through the class for over 30 minutes, I came to one conclusion. This interface was not consistent. You had to scroll one way to get to one menu, scroll another way to pull up the main icons. If you had a keyboard, you could use the Windows key to get back home. Without it, it was a mess. Had we not spent 30 minutes in the class we would have been totally lost. Even with the class, it would take a week or two to get used to where everything is.

Compare this to the Apple iPad. One home button and a simple and familiar icon interface. I was up and running in five minutes. Once I was shown how you scroll with different fingers, I was home free.

While the people in the store were very helpful and friendly, the product has a long way to go. Having two tablet keyboards not work, even after they were swapped out was a major fail. I would not buy a product like that. The Win 8 interface is even worse. With a long learning curve, users are going to be very frustrated quickly.

I did upgrade my home PC when we got home, since Microsoft was offering a $39 upgrade price through the end of the month. The upgrade process went well and my old Vista machine was transformed into a much faster Windows 8 box. The interface looked just like the one in the store and we were up and running quickly.

The big secret to making Windows 8 work, is to sign in with a Microsoft login. For most people, this will be a Hotmail or MSN e-mail address. Once you have done this, your e-mail is automatically setup, and you have your own interface unique to you. After a day or two of learning, tweaking, and playing around, my wife is pretty happy with the new machine. Taking the class at the store was very helpful. Bottom Line… the new interface is NOT Intuitive. 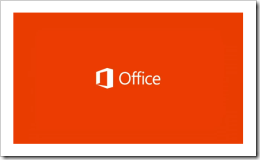 We downloaded the new preview version of Office 2013 and found that to have a consistent look and feel with the older versions. After working with Microsoft’s new Cloud interface, we were able to save documents and print things out with a minimum of fuss. Office 2013 might be one reason to consider the Win 8 upgrade.

Overall: If you have a PC with Windows 7, hold off for a while. There is no compelling reason to upgrade. If you have an older machine with XP or Vista and enough horsepower to run Win 8 (It runs a compatibility checker to let you know if you can upgrade or not) it might be a good upgrade. It made our Vista Machine much faster. You’ll definitely want to take a class to figure out how to navigate and install software.

As far as the Surface Tablet goes, I was not impressed. The interface is clunky and the attached keyboard made things difficult if you are not sitting at a desk. The fact that the keyboards didn’t work on our demo units was very disconcerting. Here again, for the price, I think you would be much happier at the Apple Store. The only compelling reason to buy a Surface would be to run Microsoft Office natively.

My Take: It looks like Microsoft is a year or two behind and decided to copy other companies instead of innovate themselves. The stores though, were bright and fun. Definitely check one out and take a workshop. Sooner or later you’ll need to know how to navigate Win 8 as it is the way of the future for Microsoft.

Question: Have you tried Windows 8 or a Surface Tablet? What are your experiences?