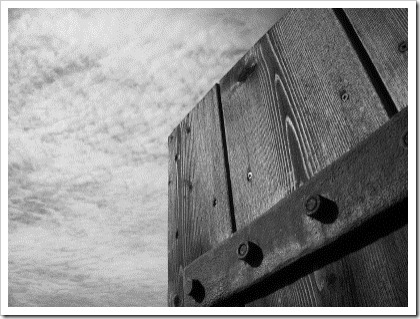 It was just another Thursday for Frank. He arrived at the back gate as usual at noon. He rang the bell and his friend Harry came out, but something was different. Harry didn’t have his usual plate of food. Instead, Harry opened the gate and invited him in. “We’re eating inside today,” he said.

This provided a dilemma for Frank. He had been on the street for a long time, his grimy beard was at least a foot long, containing all sorts of creatures, dirt, and crumbs. And the smell… oh the smell. He certainly couldn’t come in and eat.

Harry waved him in, but Frank turned and started to walk away… “I’m too bad to come in,” he said in a low voice. He started to walk up the drive. As I stood in the corner watching the exchange of words, Harry ran out and put his arm around the man.

“I put together a special plate for you today. We got Turkey and mashed potatoes with lots of gravy. And we got a special treat… pumpkin pie!”

Frank hesitated and protested, “I’m too bad. I can’t possibly come in.”

But Harry said, “I was worse than you when I came in five years ago. I didn’t have no shoes and I was bleed’n bad. You look good in comparison.”

Frank started to walk away again, but Harry gave him an encouraging pat on the back. He stopped and turned around. Harry led him in the back gate and through the side door.

A half hour later I saw Frank again. He walked into the dining room a changed man. Harry had helped him get a good long shower, a haircut, and shave as well as providing him with some new clothes.

I barely recognized him.

Frank now looked more like a CEO than a bum.

That day, my wife and I had the opportunity to have lunch with Frank and about a half dozen other men and women who came in from the streets of Pomona.

We all sat around a big table. They told us stories and we shared a meal together.

It was one of the most powerful experiences of my life.

At first, I was somewhat scared.

But soon, I realized they were people just like you and me. Maybe down on their luck or like one of the couples, who picked up cans every day on their bikes, people who had chosen a different way of life.

After that experience, something else happened.

I realized how fortunate I was to have a house, a car, and three hot meals a day as well as a loving wife, daughter, and family. I came face to face with reality. I saw a purpose in life.

My friend, Jeff Goins, has written a book about this type of experience. He relates his experience with the homeless in Nashville as well as his experiences in Haiti and different parts of Africa.

He calls it simply… “Wrecked.” 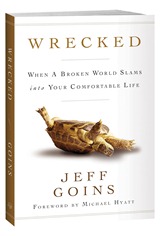 “When a Broken World Slams Into Your Comfortable Life”

This is a powerful book. If you read it your life may never be the same.

He has a special deal worth a $158 if you buy his book on or before August 4th.

You can find out more on his Wrecked Website.

This book is dangerous. Tread carefully…