Hello everyone, April 1st of 2007 marks the two year anniversary of Fire Up Today. It has been an amazing adventure and I want to say a big “Thank You” to all of you who have joined us on the journey. I want to take a few minutes today and do a recap of our first two years. We’ll take a look at where we’ve been and where we want to go in 2007.

This blog started on April Fools day of 2005, with a simple Welcome post. I had learned about blogging from an Audio book on the subject by Chris Pirillo. After listening to the book I started to explore blogs on success and personal development and decided to join the growing crowd of bloggers from around the world.

Some of my early mentors were Rosa Say, Steve Pavlina, Brendon Connelly and Dwayne Melancon. They really helped me develop a blogging voice and were kind enough to link back to this blog. As I watched my site stats each month the traffic would grow and soon I had readers from all over the world.

Rosa Say added this blog to her growing Ho’ohana Community and the voices multiplied again. Bren & Dwayne provided great feedback and I became a commenter on their blogs. Steve Pavlina’s blog really started to take off and he became a real inspiration to me to keep blogging and coming up with new ideas.

Through 2005 this blog grew at a rapid rate and we added links to other blogging voices including Troy Worman, Yaro Starak, Scott Hodge, and Phil Gerbyshak. Blogging took on a new life for me as the variety of voices increased. It became so interesting to post new ideas because of the immediate feedback.

In November of 2005, I wrote about Passionate Purpose and how a little boy with cancer changed my outlook on life. We dedicated all of the funds from advertising on the blog for two years to build a place for Les. Later in the month, my dad passed away at the age of 94. I can’t tell you how great it was to have a blogging family come to my side during that tough time.

As the year wound down we had our Blog Success Awards of 2005 with many deserving blogs being mentioned.
As we came into the year 2006, I became interested in many of the books that other blogs were talking about. I soon started a subscription to Audible.com and started downloading audio books to my iPod.

These books soon became a habit and I found a real interesting site called PersonalMBA that talked about getting the education equivalent to an MBA by reading 42 books. With the combination of the two ideas together I started the process of pursuing my Personal MBA with Audio books.

This process became a revolution in my life. I found myself listening to audio books while walking, driving, and sitting in Starbucks. The books came to life in real world surroundings. This finding led me to start a second blog called “MBA on the Run,” in March of 2006. This site is dedicated to audio book reviews of popular business books.

In May of 2006, I posted about a pocket sized organizer called the Walleteer which was picked up by popular blogs, Lifehacker and lifehack.org. This was an idea based on a smaller and pre-printed version of the Hipster PDA, made famous on Merlin Mann’s, 43 Folder’s blog. This post spawned many other card based items such as the 5 minute flowchart, pocket dieteer and the goal setting toolkit.

These personal productivity items along with our post about The Power of 48 Minutes brought in new readers from around the globe. It has been amazing to see how this simple concept of focused work has changed my life and has been helpful to many others.

For 2007 we have many new items coming down the line including a new look for the blog, a more organized interface, and some exciting new downloads.

In closing I want to close with a word of thanks to all of you who have supported this blog and our sponsors over the past two years. Your support has resulted in hundreds of dollars of ad revenue that went to help build a playground for kids. This playground opened last week with cancer survivor Les Fountain cutting the ribbon. I can’t express in words what this means to me and the many children of our local community who will benefit from it. 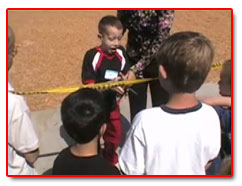 I hope that 2007 brings great and productive things to you!