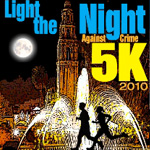 This last Saturday, I participated in my second 5K run. This time around I was excited to sign up. The night time event was sponsored by San Diego Crime Stoppers, and had lots of people participating from different local law enforcement agencies.

I learned three important things from the event.

1. Preparation: I prepared for the run by drinking lots of fluids and hydrating well the day before the event. I also had a good lunch and ran a short warm-up run in the morning. I also brought along a variety of running gear, not knowing what the weather would be like. Being prepared took a lot of the pre-race nerves away.

2. Start in The Front: Since this was only my second running event, I started way at the back of the pack. With almost 2500 runners, I found myself mired in traffic, trying to pass the walkers and reach a point that I was running with people near my pace. Since this race just had one start, It would have been better to line up early near the front, so I would have been able to get up to speed quickly. I learned that the early bird gets the best starting spot.

3. Things Get Better With Time: Like my first run, I found that things got easier in the second half of the race. My body had warmed up, and everything started to flow. Now that I know that this is the case, in future races it will be easier to get past the early race discomfort and just keep running… knowing that it will get better.

Overall this race was a blast. We ran through the historic Balboa Park area at sundown. The beauty of this spot overlooking San Diego bay was breathtaking and the vibe of thousands of people running gave off an incredible feeling of energy and accomplishment, all towards a good cause. I beat my prior event time by over a minute and am looking forward to future running experiences.