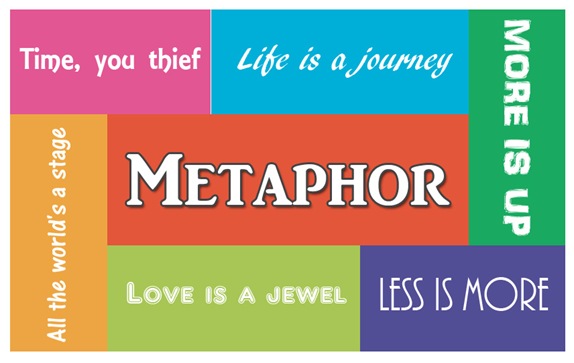 As a writer, I use metaphors all the time. They add clarity and interest to my writing.

Allegory:
An extended metaphor wherein a story illustrates an important attribute of the subject.

Antithesis: A rhetorical contrast of ideas by means of parallel arrangements of words, clauses, or sentences.

Catachresis: A mixed metaphor, sometimes used by design and sometimes by accident (a rhetorical fault).

Metonymy: A figure of speech using the name of one thing in reference to a different thing to which the first is associated. In the phrase “lands belonging to the crown”, the word “crown” is metonymy for ruler or monarch.

Parable: An extended metaphor told as an anecdote to illustrate or teach a moral or spiritual lesson, such as in Aesop’s fables or Jesus’ teaching method as told in the Bible.

Metaphor, like other types of analogy, can be useful to improve your writing by adding clarity, interest, and style. Most people use metaphors in everyday life and many times we don’t even notice it because it has become part of our vocabulary.

Some examples of common ones we use are “the ball is in your court”, “the time flew”, and “my heart is broken”. These metaphors have become so common that they are clichés, yet we still use them. Why do we use these metaphors in dialog?  Usually, to express a thought or an emotion through a strong description to help people understand the gravity of our situation.