My dad, Bill Richardson, has always been my greatest mentor. Veterans day 2010 would have been my dad’s 99th birthday. Born on 11/11/1911 my dad lived his life with two major themes. He always had a positive attitude and he loved to exercise. 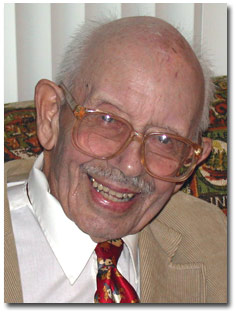 These two themes have always resonated with me.

As a kid, I remember my dad getting up each morning at 4am and heading out on his bike. He would ride 10 to 15 miles every day, usually ending up at a donut shop for a cup of coffee or the local airport coffee shop for breakfast. He loved to ride.

He rode his bike almost every day rain or shine. He rode until his knees gave out at 89. And then he started walking and running. He walked until he passed away back in 2005 at the age of 94. Exercise kept him going.

This last Veteran’s day weekend I had a chance to do both of the things my dad so dearly loved. I competed in my first duathlon. The event was held in San Diego on Fiesta island. It consisted of three separate legs, a 1.5 mile run, a 12 mile bike, and finished up with a 2.5 mile run.

It was really tough.

I have been strength and endurance training for the last few months and have participated in a few 5k runs. They have been challenging but each one has gotten a little better. But bike riding was different.

Having trained for running didn’t help me much on the bike. My legs burned like fire after the first 4 mile loop. I thought about my dad riding every day. I remembered the rainy and cold days where he headed out with two jackets and thermals on. He loved to ride. He wouldn’t want me to quit.

My dad’s positive attitude came back to me… you can do it. I could hear him say… you can do it… over and over. I remembered him on his bike… he always made bike riding look easy. Riding his bike made my dad happy. Riding my bike on Fiesta island was a challenge. I wanted to quit.

But then I remembered when my dad had a bike accident. Some truck had dropped a roll of carpeting at the end of my dad’s driveway. In the dark, he hit the carpeting and went over the bars and crashed hard. He was banged up and had trouble walking. But he wanted to ride. He was off his bike for two miserable weeks and then he got back on, bandaged and bruised.

I couldn’t let my dad down. I kept pedaling and the next two loops of Fiesta island got a little easier. Then came the final transition.

I pulled my bike into the transition area, took off my helmet, and headed out for my final 2.5 mile run. Running was easy the first loop, so this should be a piece of cake.

After 12 miles on the bike my left knee hurt like crazy and my legs felt like stiff logs. I could barely run. Two and a half miles seemed like a million. I realized then how my dad must of felt to give up biking at age 89. His greatest love caused him so much pain that he had to walk instead. But he never gave up. He walked and he ran… 2 to 3 miles a day.

I was never so glad to see a finish line in my life. But I made it. 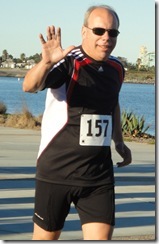 Thanks Dad. Thanks for your positive can-do attitude. Thanks for being the greatest mentor anyone could ever hope for. And thanks for never giving up!