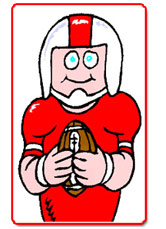 It’s that time of year again, with the pigskins flying, the barbecues blazing, and the big screen TV showing football in all its glory. Whether it is your favorite College team on Saturday or the latest NFL rivalry on Sunday, football is definitely our national pastime. The big match-ups are starting to form, the fantasy picks are going like crazy, and the word Superbowl is forming in our minds. It’s football season in all its glory.

But then it’s Monday morning, the games are over and its back to work. Another five days of anticipation. The only relief might be a Monday night or midweek game. The water cooler is ablaze with scores, player talk, and bragging on the newest victor. Wouldn’t it be nice if you could bring the game of football to work. A big-screen in the lounge… playing game after game. But unfortunately football at work is out of the question.

Wouldn’t it be cool to have a miniature stadium on your desk, complete with your favorite teams. The runner on one team heads down the center of the field, ball in hand. His only mission in life is the goal post 80 yards ahead. He runs full steam on and the opposing teams looms ahead. One by one he systematically powers his way past defender after defender. Within seconds he has crossed haloed ground and a goal has been made. The crowd goes wild and your co-workers cheer loudly.

Until now it was just a dream. But now you can have it all in one quick download to your computer. Introducing Power Goal Football, where you bring the game and the stadium right to your desk. Here is how it works…

You download the Power Goal Football zip file to your computer.
You grab some light weight card stock, a pair of scissors, scotch tape, and a handful of change. You are ready.

You open the five templates in Microsoft Word and modify the names to match your favorite teams. You send the finished documents to your local inkjet printer and soon you have a complete football kit in your hands. You grab some scissors and start cutting out the pieces.

Once all the pieces have been cut out, you start assembly. The stadium field is taped together and the stadium stands are folded and attached to the sides of the field. The goal post is cutout, folded, and taped to the field. The colorful players are quickly cutout and the power launcher is folded and taped in place. You take dimes and tape them to the bottom tab of each player.

You are ready. The gleaming stadium is now ready for action… right on your desk.

You take a nickel, which represents the football and put it in the power launcher. You release it and it rolls down the field imaginary yard after yard. It goes straight for the goal post, only to be stopped by the green player. It’s now second down and the ball is launched again. The ball flies past the red player only to be stopped by the duo of yellow and purple…. arrgh.

It’s now third down and the crowd is in anticipation. The ball rolls, but this time there is no stopping it. It powers through the players like they were standing still and crosses through the goal post … Touchdown!!

Your co-workers want a turn, and this little stadium on your desk is soon moved to the lunch room for a tournament. Who will be the victor? Will it be fast hand Sally from accounting or maybe systematic Steve from marketing. After 15 minutes, Sally raises her hands in victory. Her symbolic Colts have won over the Patriots!

Download Instructions:
Download the Power Goal Football zip file.
Unzip and open the documents in Microsoft Word
Change the team names and colors to match your desired football favorites.
Print the pages on 60-80 pound light card stock
Use white card stock for the players piece and the stadium sides.
Use colored card stock for the field pieces

Assembly Instructions:
Take scissors and cut out the pieces on the players sheet and the stadium sides. On the stadium sides, do not cut on the side lines but cut all the way to the edge of the paper, so they are the same length as the field pieces.

Assemble the field. Put both field sheets upside down and tape together vertically so they come out like the picture above.

Assemble the stadium. Fold the stadium side pieces on the gray part at the angle in the picture shown below. With the field pieces upside down, tape the folded side pieces to each side of the field (have them upside down to do this). Turn the whole field and stadium over when you are done. It should look like the picture above.

Assemble the players. Cutout each player and fold the bottom tab back at a 90 degree angle. You can just cut them square to make it easier. Tape a dime or washer to each player with scotch tape as shown below. 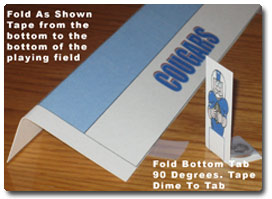 Assemble the launcher. Cutout the launcher and fold it on the lines leaving the bottom of the fold about 1/8 wide. Tape the folded launcher to a mini clip as shown below. You can put a small piece of tape at the top of the launcher to hold the sides to together. Just make sure to leave a gap so the coins will roll freely. You may have to experiment a little with this for best results. 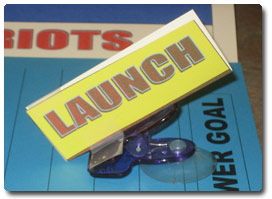 Games You Can Play:

Put a coin in the launcher (nickels and quarters work best for this) and aim the launcher towards the goal. Release the coin and you’ll see how fast and far they roll. Practice this for a few minutes until you get the hang of it. You may have to adjust the launcher width to make sure the coins roll free. Once you get the launching down you can play the following games…

Points Blast: The same as the game above, but you can use the yardage marks on the field to determine points. The further back the more points you get for a successful goal.

Center Blast: Space six players in two columns about a half inch apart a few inches in front of the goal. Space the players about an inch apart behind each other. Your goal is to get the coin through the half inch column between the players without knocking them down and making a goal. You can modify this with different spacing and using the field markers to adjust points.

There are many more variations you can try on these basic concepts. Please let me know different games you come up with.

Here’s to Your First Touchdown!