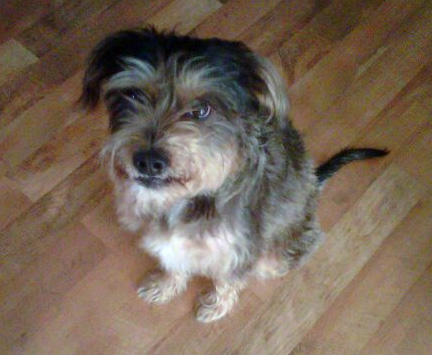 Last week a simple action caused me intense pain. It wasn’t answering the phone or lifting a couch. No… It was much simpler… And much more insidious.

I bent over to put my shoes on and my back went out.

No warning. No signs of distress.

I didn’t see it coming.

Just a simple action that sent waves of pain across my lower back.

Once the pain came, I could hardly walk. I figured a hot shower might fix it up. I got in the shower, but even the hottest water didn’t relieve the pain. I could barely get around and my wife had to help me put my shoes and socks on. I drove to work and sat in subdued pain all day.

This was a bad one.

I had pain like this before when I was a mechanic, but it had been years since it had acted up. I had just come back from an amazing cruise and a waterfall adventure, but nothing that would cause something like this.

I didn’t know what to do. I figured it would go away in a few days. I took Aleve and made it through the day.

Five days came and went, but the pain was still there.

I had to do something.

I checked with my healthcare provider and found that I had a Chiropractic rider, so I looked up Chiropractors near where I worked. As I went down the list, I saw a name that stood out. Dr. James Von Hipple. Hmmm, where have I heard that name before? Then I realized that Dr. Von Hipple was a Facebook friend. He was the guy who was training for an Ironman Triathlon in June. He was also the Chiropractor with Congo, the wonder dog.

I have been following Dr. Jim for almost a year. His stories of running and biking long distances with his dog Congo have been amazing. Anyone who could even think about doing an Ironman was either crazy or very disciplined in my book. But having a dog help you train over long distances was even better.

I knew this was the guy I needed to work on my back. I called and made an appointment.

Yesterday at 4pm, I entered the offices of MAC… Murrieta Advanced Chiropractic. I had never been to a Chiropractor before and I didn’t know what to expect. I certainly didn’t expect to see an office full of people.

But as I walked in the door there were people standing all around. I stood in the waiting room and peaked through the door to the Adjustment room. There was lots of commotion. Suddenly a rather large man walked out of the room, looked me in the eye, and held out his hand. “You must be, John,” he said with a smile. He shook my hand and handed me some papers to fill out. I took a seat and watched with interest as people went in and out of the room.

As I wrote down the information, my ears were perked up. I had heard all the horror stories of the Chiropractic procedures. The first few people went in quickly, got some kind of “adjustment” and then left. It didn’t seem so bad. Then a guy that was standing in the corner who was in a lot of pain was called in…

The adjustment room door was closed.

Then the groans and agony started.

A lady in the waiting room turned her head.

With each adjustment then pain got louder. I was getting scared. My back hurt a lot and now I knew what I was in for.

Then a huge muffled scream came from the room. Everyone in the waiting room cringed. I had a picture in my mind of my back breaking in two. Then an “Oh God” and another scream of pain came from the room. I started praying right then and there. Ol’ Dr. Hipple was a big guy and he could certainly inflict a lot of pain.

I knew I was in trouble!

Suddenly, the adjustment room door opened, and the man walked out. He seemed straighter than before, and he shook the doctors hand. He would be coming back in a few days for more. His wife helped him out to the car.

Dr. Jim then looked at me.

He had me lay down on the bright blue adjustment table face down. I could feel his hands going over my back. And then the adjustments began.

He said one thing that resonated with me…

I’ve heard that before. My mind was in a whirl. I knew that pain was coming. I knew that my back problems weren’t that simple. I gritted my teeth as the first adjustment started.

I heard it. My upper back let out a loud crack.

My mind raced, but something wasn’t right. I heard the loud crack, but I didn’t feel any pain.

The second adjustment came and it was the same. I heard the crack and felt something move in my back, but there still wasn’t any pain.

But now the doctor moved to my lower back. Now the pain was sure to come.

I knew my back was going to break…

Wow… No pain… He moved to the other side and the same thing happened.

Within a few minutes the adjustment was done.

As I stood up I felt better and straighter.

While the pain wasn’t completely gone, everything felt much better.

Dr. Jim made me an appointment for later in the week and led me out the door. As I got in my car to drive away, I noticed something else. My head was hitting my headrest. This was not normal.

Then I realized that he had truly straightened my back.

I hadn’t died and within minutes felt a whole lot better.

Maybe going to a Chiropractor wasn’t so bad after all. 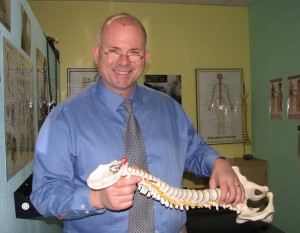 Thanks Dr. Jim for the help.

Maybe next time I can meet the famous Congo!