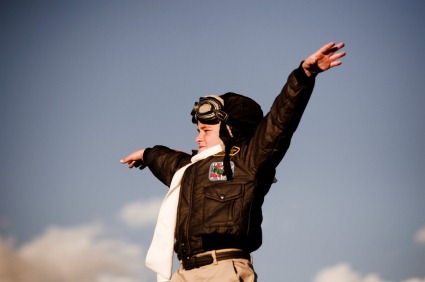 I love to dream. When I was a kid, I used to dream about flying like a bird. It was one of those dreams that I knew was impossible, but was cool to envision. I could see the ground below, and the clouds up high. 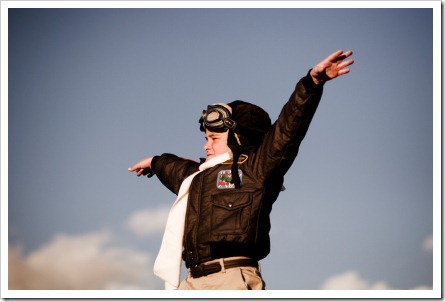 I hated to wake up.

As I’ve grown older, I’ve been tempted to put those dreams aside.

I’ve been told to be a realist and tone those dreams down.

Don’t get your hopes up John, it will lead to a letdown.

Put your dreams away, and do the mundane.

Don’t color outside the box.

Put the colors away.

I have found one thing.

When the dream is truly big enough.

That I can’t possibly do it myself without help.

Something amazing happens. Something truly great.

I have to reach outside myself, ask others, and pray to God.

It’s only when they are impossible that doors open up and things happen.

When I have normal goals, I’m totally in control. I have to make every decision myself. I’m only as smart as my brain allows. Sometimes things go right, but many times I fail. My bad habits take control. Fear overcomes. I stop dead in my tracks.

But when I have an impossible goal, more often than not they do come true.

I remember my first 5k run. I’ve always been a sprinter and I would die if I had to run very far. Running 3.1 miles seemed impossible. To train, I started running around the neighborhood, doing interval runs. I would run and then walk. I started with a mile, then two miles, and then I would do intervals for 45 minutes. But actually running for any length of time hurt real bad.

I decided to go and see an actual 5k event. At the last minute, I signed up to run. As I stood on the starting line, I kept questioning myself. I remember praying, and asking God to get me through the next hour. When the gun went off, 3,000 people started running. I started running along. When I came around the first turn, I faced a huge obstacle.

A steep uphill climb over a half mile long.

Where was God when I needed him?

I kept focusing on the legs in front of me, but I felt like I was going to die. The excuses started running through my mind. I could just give up… no one would ever know.

To go on right then, seemed impossible.

I stopped on the side of the road.

But then, something happened.

The sun started to break thorough the clouds, and one of the women that I had passed going up the hill, stopped and gave me some encouragement. She simply said… “You can do this!”

I started running again, and as I looked up, right in front of me was a group of 10 people handing out cups of water. It was like a gift from God himself.

The water stopped the cramps and the rest of the race was downhill.

The woman who had given me the encouraging word was now a 50 yards ahead of me. I focused on catching her. To thank her (and a little competitive guy thing about having a woman beat you), I started running faster. As we came to the last corner, this gal, dressed in bright green, was only 50 feet ahead. I started sprinting, like I was back in high school. I crossed the finish line six feet behind her.

A fun race, and through the encouragement of another runner, a race that I finished.

What had seemed impossible less than an hour before was now done.

I caught up with the gal in green and thanked her for her encouragement. She smiled and thanked me for the encouragement to climb the hill… She said, “When you passed me on that hill, I knew I couldn’t let some guy beat me. It gave me the needed boost to make it.”

We laughed, and I realized how much we need others to reach impossible goals.

As I write this today, I’m about ready to head off to the Catalyst West Leadership Conference in Orange County. I plan to see an assortment of speakers doing incredible things…

Michael Hyatt, who has created a world class blog and written a new book called “Platform” which is due out next month. Michael has been one of my greatest mentors and truly helped me when Setbacks and Failures come.

Nancy Duarte, whose books Resonate and Slideology have helped me immensely with presentations and speech design, will be sharing today about Presentations that Transform Audiences. Her TED presentation on using Contrast in your speeches, changed the way I prepare all of my presentations.

Bob Goff, who I met at Don Miller’s Storyline Conference, is one of the most encouraging people I’ve ever talked with. His story of creating a holiday parade in his neighborhood, will inspire you with hope and the fact that you really need to start with impossible ideas. He simply turns imagination into action. He has a new book coming out called Love Does which includes a magical story of his office on Tom Sawyer Island at Disneyland.

This conference is always an inspiration, and all three of these speakers have changed my life. A good way to start on an impossible journey is to be inspired by people like this that have blazed the path.

Impossible Dreams: The other day I wrote about a dream I currently have to put together a book and a conference entitled Relevant Light. This material is based around the acronym LIGHT, which stands for..

Right now this seems impossible. It’s way outside my league. Getting a book picked up by a publisher is hard enough, but to put together a conference…

But I am encouraged…

It’s too big to do myself.

The thought of the impact makes it exciting.

And God loves to take the impossible and make it happen. 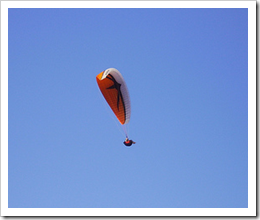 He stayed aloft, flying for over an hour last weekend in his paraglider.

Question: What Impossible Things Do You Want To Do?