If you want to make a significant impact in your life, or in the lives of others, you need to start with impossible. You need to make the goal big enough that it extols excitement, and seems, at the time, impossible to accomplish. Some people call this type of goal a BHAG (big, hairy, audacious goal), other people might call it a HARD goal.

Researchers have found that the human mind, when faced with change, will put up a flight or fight reaction, set off by the part of the brain called the amygdala. This fear based reaction can stop us dead in our tracks when trying to accomplish a goal, or change a habit.

There are two ways around this…

Take very tiny steps at first, so the flight or fight response is not activated… or

Make the goal so big and so cool, that the fear response is turned into excitement.

Both of these are proven to work, and the small step approach (kaizen) is great for more mundane goals. But if you want to see significant change happen in your life, start with something so big, that your friends will laugh, your shrink will check your sanity, and you will find exciting.

Let me give you a couple of examples that worked in my life.

Back in the year 2000, I decided that I needed to lose weight. I was at least 15 pounds overweight, so I decided to go on a diet. My goal was simple. I would go on a simple weight loss plan and lose five pounds. Once I did this, I could easily lose more. I started the diet, and then something would always come up to sabotage me. Little did I know that it was my amygdala causing a fear response.

I would lose a few pounds, only to lose interest, or forget about the diet.

Weeks later I would start again, only to fail miserably.

You would think that I could lose a measly five pounds, but my flight or fight response kicked in every time.

This went on for almost four years, until I heard a speaker at a Toastmasters conference challenge me to take on a BIG goal. In the summer of 2003 I picked up the book, Body for Life, and read about a very serious exercise and eating plan.

This was no ordinary plan.

People were transforming their bodies and losing substantial weight, all in 12 weeks time.

I looked at the before and after pictures in the book. Overweight men and women were turned into slim and trim body builders.

At first I didn’t believe it. It had to be impossible. I couldn’t lose 5 pounds in four years, how could I possibly do this. But then a sense of excitement kicked in. This was no measly 5 pounds we were talking about. This was a complete body makeover.

When one of the guys at my local Toastmasters club gave a speech about the plan and showed off his 6 pack abs, I knew I had to give it a go.

My amygdala had no chance this time.

I got a timer and started working out 48 minutes a day, six days a week. Three days were weight training, three days were aerobic. Each week, I would lose two pounds. After a few weeks, people started talking. They started asking questions.

I would have bet you money that that was impossible only a few months before.

The same thing happened years later, when my friend Karen Robertson came to our Toastmasters club and talked about the Triathlon she completed. This woman was in her mid sixties. She challenged everyone in the club to give it a go.

I knew one thing for sure.

The thought of running a Triathlon was impossible.

I’ve never been much of a runner, but to run, bike, and swim… all in the same day… there was no way that was happening.

But Karen shared something that day that just killed my amygdala. She talked about the utter excitement of crossing that finish line and getting a medal.

When she held that shiny gold medallion up I knew I had to give it a try.

One year later, after numerous 5k’s and lots of training, I crossed the finish line. WE both completed the race that year. 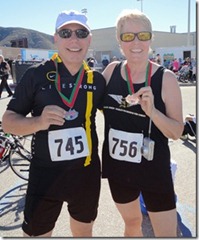 The secret to significant change is turning fear into excitement.

I truly think everyone needs an impossible goal. Something that will get you out of bed in the morning and put a smile on your face.

While personal change is exciting, when you want to build a legacy, you need to change the world. The best way to do this is to start with impossible!

Tomorrow, I’ll show you some people who are doing just this… one house at a time!

Question: What Impossible thing would you like to do?