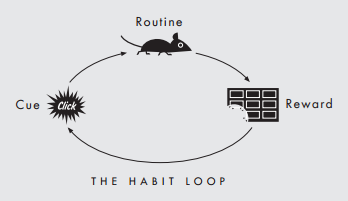 Back in the summer of 2003, I attended a Toastmasters District Convention in San Bernardino. At the event I heard a dynamic speaker named Sarano Kelley talk about setting 12 week goals. His 90 minute presentation changed my life.

During the presentation, he walked down the aisle and stopped right in front of me and in a loud voice, asked…

He then looked directly at me, and seeing my name tag, declared to the whole audience…

I didn’t know what to say at first, but then I mumbled out…

At that exact moment, something clicked.

I knew that I couldn’t walk out of that event without changing.

I picked up some information and decided to set some goals.

The next week, I picked up the book, Body for Life, and set a 12 week goal to lose weight.

I didn’t realize it at the time, but that goal had created a powerful new habit.

In the Body for Life book, the author had included numerous before and after pictures of people who had completed the 12 week program. Many were very dramatic. As part of the program, you were instructed to take a picture of yourself in a bathing suit and put it in a prominent place where you would see it.

I took the picture and posted it on my refrigerator door.

This picture formed the first part of habit change, the Cue.

Every morning, when I would walk into the kitchen, I would see the picture.

This was followed by a New Routine, the second part of habit change.

I would open the refrigerator and have a healthy meal

This was followed by a new fitness routine of weight training and aerobic exercise.

Six days a week, I would follow this routine. The meals and exercises would differ, but the routine was the same.

The third part of habit change came the following Monday. The Reward came when I got on the scale, and I had lost two pounds.

This new habit was easy to follow, once I started seeing results. The first week was hard, but I had enough willpower to see it through. Every week I lost about two pounds.

This simple weight loss program had all three things a habit needs to form.

I had written down a weight loss goal and posted it by the picture on the refrigerator. I also had a weekly weight loss tracker to follow my progress. The Body for Life program also had an online community, where you could post your goals and interact with other participants. 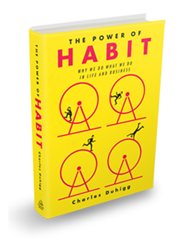 In his new book, The Power of Habit, author Charles Duhigg describes the basic trifecta of a habit, Cue, Routine and Reward. The diagram below shows the process.

While these three elements form the basis of a habit, researchers have found some additional things that will help you stick with your habits when the going gets tough, and some key ways to change or create habits.

Over the next few days we’ll examine…

We’ll include some free downloadable guides to help you stick with your newly changed or created habits.

Question: Do you have existing habits you would like to change?