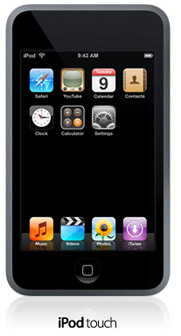 Pick up a new iPod Touch from Apple and you’ll enjoy video and music like never before. Take your new iTouch within a 100 feet of any Starbucks coffee shop and you’ll instantly be connected to their wi-fi network. With one touch you’ll be able to download the music that is playing in the store or any other music on iTunes directly into your new iPod touch.

The prices for each song are the same as regular iTunes and this marketing move is brilliant.

Here is how it will work: When an iPod touch owner is near a Starbucks (isn’t there one on every corner?), a Starbucks button will appear on the display, which will allow users to buy whatever song is playing inside the store with a single tap of the finger and also the last 10 songs played. The iPod touch will also get free access to the iTunes Store from Starbucks as the result of the partnership announced between Starbucks and Apple.

With a 3.5 inch wide screen display, built in wi-fi web browser, and a touch screen interface this new iPod will fly off the shelf at $299.00. You can see the promo video of this amazing device here. Amazon and other retailers should have the new Apple

product line in stock within a few weeks.