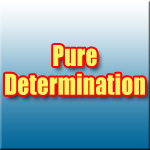 I had a chance this weekend to participate in my first sprint triathlon. The Tinsel Tri was held in Hemet California and celebrating it’s 25th anniversary. The event was a backwards Triathlon starting with a 5k run, then 12 miles on a bike, finishing up with a 150 meters in a heated pool. 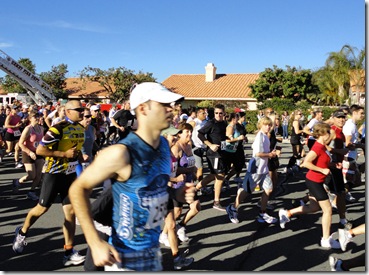 The event was exciting, with over 1200 people starting in all age brackets. I wasn’t sure what to expect, but as the air blast went off, the crowd started running and I followed along.

The 5k pace was brisk on this beautiful December day. The temperature was in the seventies with beautiful clear blue skies. I ran along enjoying the view and the excitement of the crowd. The pace accelerated some as the crowd thinned out. As I went around the second corner I almost stopped dead in my tracks.

There was a woman running the 5k race on crutches.

She only had one leg.

She had a great pace, a smile on her face, and amazing encouragement from the crowd.

I don’t think I’ve ever seen someone with so much determination.

I have a lot of excuses for not doing things… it’s too hot, it’s too cold, I’m too old, etc etc.

But this lady was running.

She was doing something that most of us would never consider.

She figured out how to do it and she made it happen.

I don’t know what her name was, but seeing her encouraged me like nothing else.

There were other handicapped racers in the event, some well up in years. They each had different ways of competing. Some had artificial limbs, others had custom hand powered bikes. This woman just had crutches.

The rest of the race was challenging. The temps were pushing 80 degrees and I couldn’t wait to get into the water. As I got off the bike and ran from the transition area to the pool, I was a little apprehensive. I didn’t have much swim practice. As I dropped into the deep end of the pool and pushed off, I realized my legs were mush and my arms weren’t much better.

My strokes didn’t get me very far.

I started to sink.

Fear came over me.

Then I thought of that lady on crutches and knew I couldn’t give up.

Suddenly I remembered what a swim coach said… “If you can’t go on, turn over on your back and do the backstroke.”

I turned over, with swimmers all around me and started swimming backwards.

It was slow… but it worked.

After what seemed like hours, I finished the swim, and picked up the finishers pin.

After an hour and thirty five minutes, I was done.

By the way, if you think you’re too old to do something like this, don’t tell my speaker friend Karen Robertson. She’ll be motivating you to do it. At 67 she also competed in this Triathlon and finished in under two hours. She spoke about her first Tri six months ago at our local Toastmasters club. She inspired a lot of us to do something crazy like this. To give up our excuses and just go for it!

Thanks Karen, for the encouragement.

To see the amazing things that people with disabilities are doing, watch this video. 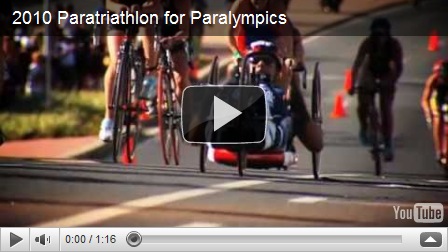