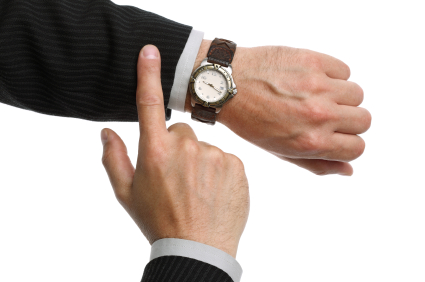 As we discussed in our last post, Integrity is about telling the truth and doing the right thing. Integrity is also about the little things… are we reliable and consistent on the job and at home? Do we answer phone calls, do we return e-mails and the big one, do we get to work on time, are some of the things we are all judged on. 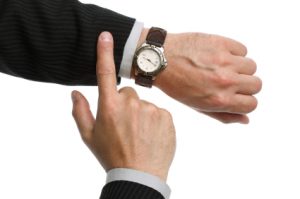 Being late on the job can give us a reputation for being unreliable. With the craziness of home and the incredible traffic in most cities, many of us face a daily battle in this area.

Here are some strategies to help you consistently get to work on time.

The Night Before: Getting to work on time really starts the evening before. Here are some quick tips that will save you a lot of time in the morning.
1. Get coffee ready: If you drink coffee, prepare your coffee maker the night before and set the timer to go off a few minutes before you get up. The wonderful aroma will greet you in the morning and save you about 10 minutes of prep time.
2. Make your lunch: If you take your lunch to work, prepare it the night before and put it in the refrigerator. In the morning you can just grab and go. This will save you time and also money. For example; If you don’t have time to make your lunch in the morning, you’ll find yourself eating out, which costs considerably more than brown bagging it.
3. Get clothes Ready: Get your clothes out the night before. This will ensure that you have something to wear and cut down on the last minute stress of finding the lost sock or a matching shirt.
4. Sock Strategy: Here is a quick tip that has saved me a lot of time. Every six to eight months I buy a few packages of new dress socks. I make sure they are all the same brand. I toss out the old ones and have a consistent new selection to choose from. A few dollars spent saves me a lot of time trying to find a matching sock. (The same technique works great for white socks, underwear, and wash cloths)

In The Morning: Time is of the essence. You can’t make up time like you can in the evening. If something runs over… you’re late. Here are some things I’ve found to get me out of the door on time.
1. Set the alarm consistently: Without an alarm I find myself getting up late many times. Once I’m late the day turns stressful immediately. It’s really important to set a consistent wake up time and stick to it. Even if I got to bed late the night before, I try to keep the same alarm time.
2. Do the routine stuff first: If I shower and get dressed first it’s much easier to stop what I’m doing and get out the door. If I leave the shower for last I usually under estimate the time it will take. I forget that all the “get ready” stuff really adds up to at least 15-20 minutes.
3. Set a bathroom time goal: Why does getting ready in the morning take so long? I set a timer to find out. It turned out that there are so many little things that “just take a minute,” that they really add up. Time yourself one day and set a goal to reduce your time by 20%. It’s easy to do if you focus on the little things.
4. Clock in the shower: The biggest time waster in the bathroom is the shower. There is something about hot water that makes time fly away. It’s real easy to spend 15 or 20 minutes in the shower without realizing it. Get a cheap stick on clock from the dollar store and put it in the shower where you can see it. Set a goal of five minutes max. You’ll not only save time but money too!
5. Weather-traffic report before leaving: If you have to commute very far, log in to the local traffic and weather report before you leave. This can provide big time savings as it lets you know whether to take an alternate route or not.

In Traffic: If you have to commute very far, you know the frustrations of sitting in traffic. For years I had a 60 mile, one way commute from Temecula into San Diego. Here are some things I learned along the way
1. Carpool if Possible: If you have to drive over 20 miles to work, consider carpooling. Many states provide a database of potential carpooler’s that commute to and from the same area that you do. Try a few out and see if you can form a group of three to five people. In my experience, carpooling is fun and will keep you on schedule, since everyone needs to get to work on time. With carpool lanes on many freeways you can save a huge amount of time by carpooling with others.
2. Alternate Route planning: Traffic is a bear and it is a good idea to spend some time on Google maps plotting out some alternate routes to work. In my commute we found some side streets that really paid off when it rained or the traffic was heavy. It’s also a good idea to stop by your local auto club and pick up some maps of your commuting area and keep them in the car for reference. If you have a Smart Phone using a GPS service like Google Maps can save you an incredible amount of time by alerting you to alternate routes.
3. Offramp strategy: In my daily commute to San Diego, traffic was bumper to bumper many days. We found a technique that saved us 15 to 20 minutes a day when coming home. In the Rancho Bernardo area of northern San Diego, the 15 fwy had about five off-ramps in a row that were a straight shot off the freeway and then a straight shot back on. Since the freeway was usually stopped, we would just exit the offramp and then get back on the onramp. We could do this for five exits. There was actually very little traffic on the freeway ramps, and we were a carpool so we could take the carpool lane back on. I was always amazed that very few people knew about this. (Thankfully they have now added a carpool lane all the way to Escondido)
4. Audio learning: It’s a long commute so you might as well learn something along the way. Audio books are a great way to learn as you drive and will make the trip seem much shorter.

These are just some ideas for getting to work on time. Try a few of them and you might find that you’ll be arriving much earlier to work. Getting there just five minutes early can pay big dividends in your reliability and it will also give you time to get a cup of coffee or tea on the way!