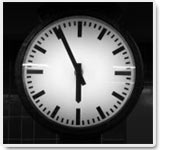 I had a somewhat disturbing revelation the other day at church. My wife and I usually go to second service and for some reason we always seem to be a few minutes late. As we walking in someone said “you’re getting a reputation for being late to second service”. A “reputation for being late”… not something I want on my resume. I was mad at myself and I vowed that things would change.

When I got home I did a little thinking about the problem. I realized that over the past few months time seemed to be shifting backwards and I found myself being a few minutes late for different things… work… church… and other meetings. Never more than a few minutes… but enough that people noticed. I decided I needed to do something about it.

What would happen if I was five minutes early instead of five minutes late… would people notice? Would it make a difference?  I started timing things and I suddenly became aware of just how long things actually take. The drive to work actually takes 15 minutes instead of the 10 that it used too. How could this be? When I plotted it out I found that the addition of three new signals slowed my progress down a few minutes each. There is a lot more traffic than there used to be.

I timed things at home and found the five minute shower had turned to a ten minute one. Taking my lunch took an extra three or four minutes and feeding the dogs with a new kind of food added a couple more. All of a sudden I could see the almost imperceptible problem emerge. Everything added together was slowing me down. The half hour I used to plan on for getting ready and driving to work was now taking longer. Thirty minutes would not work anymore.

I decided to make a new habit by doing a ten minute transformation.

Time was moved back 10 minutes

My schedule was turned around backwards. I started doing the routine stuff when I got up instead of waiting until it was almost time to go to work. I made my lunch earlier and got the dog’s food ready in advance. I put a little clock in the shower.

This small little change has made a real difference in my life. The stress level is much lower when I’m early and I don’t yell at drivers to get out of my way anymore. I arrive refreshed instead of uptight. I actually have time to check my e-mail and get a cup of coffee before the day starts. I’m still tweaking things and every once in a while a unforeseen thing comes up but for the most part I’m five minutes early.

It’s a simple little change and it’s becoming a new habit this month on my 12 habits program.

Nothing earth shattering… but I think people notice the difference.

Your Life. Your resume. Your Move! Post Your Resume FREE Today!