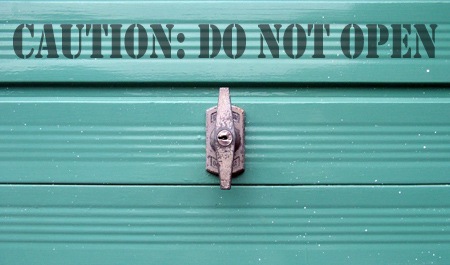 There is a dirty little secret that most people have. Hidden behind doors, and piled high in closets and garages is a stack of clutter. Clutter that sometimes defies description.

Dear readers, I hate clutter. I have a daily personal battle with it. It comes in the form of junk mail, impulse purchases, free gifts, and free samples. It creeps in when you least expect it and finds a place on any flat surface in your house. It loves the kitchen counter top and the kitchen table. Soon it multiplies and finds a way into the office, where it piles high waiting for action.

Unfortunately, if I let my guard down for just one day, clutter will get a foothold. When I have a busy week with many important projects, I can have a real battle on my hands. I call it “The Curse of Stuff,” and it really can take time and energy to overcome it. 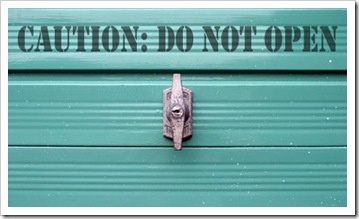 I have had an experience over the last two weekends that have really taken this problem to a new level. It’s called “Other People’s Stuff,” and it came in the form of 50 years of clutter from my dad’s house. My dad passed away two years ago and his stuff was moved to my sister’s house. My sister is now in the process of moving to a smaller house with little storage space and something had to be done.

In this stack of stuff were important papers, antiques and collectibles, old clothes, tools and supplies, and basically anything you would probably find in your own home. Unfortunately procrastination had reared it’s ugly head for many years with these items. My dad had put off dealing with it for years, and my sister never found the time to go through it.

The clutter basically got moved from place to place numerous times and got bigger and more unruly each time.

I set one rule this time… I’m not moving it again!

But here was the problem, neither my sister or I knew what to do with it. It was an overwhelming problem causing a huge amount of stress. We needed help and we needed it bad.

I started asking friends if they knew anybody that could help and one name came to the surface… it was an organization called Clutter Stop.

Clutter Stop is run by Sheila McCurdy, who is the author of a popular book on clutter control called The Floor Is Not An Option. I called Sheila and she made arrangements to look at the problem.

When she arrived, she opened the door to my sister’s garage and was faced with a floor to ceiling mess. She spent a few minutes assessing the situation and also looked at the three storage sheds of additional items. She immediately formulated a plan and set an appointment to tackle the problem in two weeks.

She ordered a dumpster and hired a crew. On that fateful Saturday, she arrived early with her sidekick Millie and four helpers. The door to the garage flew open and everything was taken out and sorted on the front lawn. The garage was thoroughly cleaned and important furniture was brought back in and set in rows.

Antiques and collectibles were brought in, sorted and displayed on top of the furniture for an appraiser to look at. Important papers and photographs were put in their own section. The rest of the items were sorted for a garage sale and if the item was not sellable it was thrown away.

Her crew was amazing and at the end of the day we filled the dumpster twice over and had a very organized garage. I can’t tell you how nice it was to have someone take charge and tackle a very overwhelming problem.

We have since hired an appraiser and had someone who works with estate sales sell the antiques and collectibles for us. My sister’s older children are coming next weekend to do a huge garage sale. While we still have a ways to go, Sheila’s commitment to tackling clutter got us over the hump.

I have ordered Sheila’s book and just looking at the reviews I know she’ll have some great tips to help me with my own house. If you find yourself facing the agony of clutter, be sure to log onto Clutter Stop for some very helpful resources!