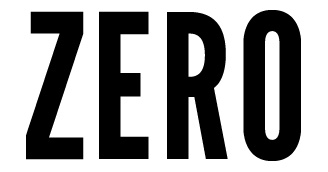 Years ago I had a job in outside sales. I sold automotive fasteners and called on repair shops, dealerships, and parts stores. It was a good job, but it had one glaring drawback.

Every day started at zero.

No matter how well I did the day before, I always started the day with a blank order form.

This made it hard to get out of bed in the morning.

Social media is the same way.

I fire up my machine to a blank line.

My mind goes blank… what am I going to say?

Maybe it’s just me, but I don’t like zero. I fight zero. I hate zero…

So what is one to do with zero? Can we fight it, control it, destroy it, or maybe employ it?

Some of the great salesmen that I knew fought with zero. They got out of bed in the morning with a dagger in hand. They needed to kill zero before 8 am. They couldn’t leave the house with zero on the pad. They were on the phone, with passion in their eyes. Call after call, rejection after rejection… they were driven…

The clock would tick, their fingers would dial, the raging battle was on… Zero was toast…

But not for me. Zero controlled me. It depressed, agitated, and sometimes destroyed me.

It was never ever fair. Zero had a power unlike any other. There was nothing I could do.

Until one fateful day, late in May, with a customer named Ray, did zero die.

It was all by mistake. I hadn’t planned to do it, it just happened.

I forgot to send an order in at the end of the day.

When I awoke from my bed, it said hey.

There was no zero that way.

I had found a way, to start the day, that really was OK!

I had discovered a buffer. If I held an order back, I could go on the attack.

Zero would die… and that’s not a lie!

So every day, I would hold back one order… in order to silence zero. I woke up with a smile, with power in my step, out the door and on to sell more. There was no zero to deal with, no depression to overcome. It was a simple but effective way to kill nothing.. nada.. zero.

You can literally wake up and have had tweets and posts sent on your behalf.

Just sign up for the Bufferapp service and you can schedule your social media in advance.

And say goodbye to zero for good!

Question: Have you tried Buffer Yet?