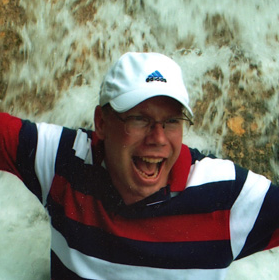 I had the pleasure of attending the Cre:ate Cruise, with Michael Hyatt, Randy Elrod, Pete Wilson, and Ken Davis, over the last week. During the first sea day of the cruise I had a chance to pitch a book proposal to Michael. It was an amazing experience, and Mike gave me a lot of great feedback. My proposal was based on a book about success topics we cover here at Fire Up Today.

Mike helped me refine my ideas and zero in on a specific area for the book. He also suggested that I get an agent to help me interface with different publishers. Overall I left with some great knowledge to move further along in the process.

The next day we docked in Ocho Rios, Jamaica. My wife and I took an excursion to Dunn River Falls, where I attempted to climb to to the top of the cascading 600 foot water fall. As I stood on the beach looking up at the rushing water, the climb seemed almost impossible. The waterfall was about 30 feet wide at the base, and had a very steep initial climb. 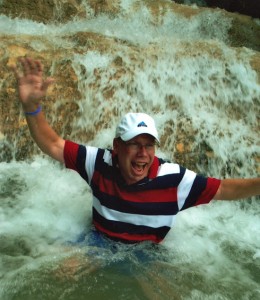 Our adventure guide and photographer grouped us together on the beach and had us line up holding hands with the people next to us. The guide then started up the near side of the falls, rock by rock, holding the hand of the first person in line. We each took a step at a time, getting wet very quickly. At first it was hard to tell how slippery the moss covered rocks would be. A few times my feet slipped slightly causing me to pull hard on the people next to me.

We looked like an unruly snake slithering our way up the initial face of the waterfall. Step after step, we went with the water getting deeper and faster. Thankfully I had someone ahead of me telling me where the drop offs were and showing me the hand holds along the side. When we weren’t holding hands, we were pulling ourselves up and then helping the person behind us.

The first plateau was a welcome relief. We spread out and took a few minutes to catch our breath. The photographer was snapping pictures and taking video. After a few minutes we were on our way again climbing the second face. It was easier this time, but we still had to form a line and pull each other along.

The second plateau had a surprise as we filed out. The guide led us from one side to the other and then had us slide down a short water slide, where we were fully immersed from head to toe. Thankfully the day was hot and the warm water felt great. Now we headed out to level three where we had to crawl our way under a concrete bridge. The leader gave us specific instructions… “Keep your head down,” he yelled. As we moved through the rushing water there was only a couple of feet between the water and the bridge. He barked different orders guiding us across drop offs, deep pools, and sharp rocks.

As we exited level three we were climbing again, this time through a longer more modest section. It took a while but we finally made it to level four. Now we were in a wide pool, with a very steep waterfall ahead. As I looked across the pool, I saw an exit sign. I figured this was the end of the tour. Surely we wouldn’t be able to climb the next section.

However, I was wrong. Our guide started up the steep rocks and we followed along. This time the water was running very fast and deep, and each step was treacherous. And then it happened. I found myself on the side of a three foot rock. There were no hand holds and no way around.

I figured I would have to go back.

Just then, the guide appeared over the rock and grabbed my hand and pulled me up. Soon I was at the top in pool number 5. I had conquered the waterfall. The people that made it all gave each other high fives. What looked impossible, was now a reality.

It was then that I realized that the waterfall was like getting a book published. Starting at the beginning they both looked impossible. But with the help of mentors, you could start the daunting process step by step. When I started my first book, it was the help of a small writer’s group that got me through. Step by step, I was able to outline and start writing. My writing mentors were like those people at the waterfall. The more experienced pulled the rest of us along. Soon I had the plateau of an outline.

Level two in the publishing realm was where we all totally immersed ourselves in writing. We dove in and were soon baptized with amazing stories and characters. It was somewhat scary at first, but the words soon found a level of comfort.

Level three, was where our first drafts were done, and we now needed the guidance of an editor. Barking out directions, our writers group editor helped us refine and correct our mistakes. Like climbing under a bridge, we had to lower out heads, swallow our pride, and correct our errors. It was tough at first, but the results were amazing.

Now we were ready for level four. We put the finishing pieces together for our manuscripts, added title pages, bibliographies, and a table of contents. Some of us took an early exit to self publish, but those that remained faced the biggest challenge yet… getting picked up by a publisher.

The last publishing level is hard to achieve. Many turn back from the current of rejection. The vast majority of book proposals are rejected out of hand. It’s only when you have an agent or publicist working for you that you’ll find a hand to pull you up over insurmountable rocks. It’s tough and very few succeed, but if you make it to level five, you have accomplished something that few people ever see. A published book, printed by a major publisher.

As for me, I’m still in level four, but with Michael’s wisdom and guidance I may be able to find a guide to lead me to the top . I know it won’t be easy, and the swift current of rejection is daunting at best. But I know one thing… I climbed the real waterfall, and I know what it feels like to be in that top pool. Look out below, I’m going for it!

Question: Are you working on a book? If so, what part of the process are you in?