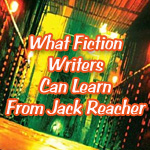 Over the last two years I’ve done a lot of research on how to write fiction. I’ve investigated the keys to a successful plot, picked up some secrets of good dialog, and even put a pen towards creating amazing characters. Some great books such as Stein on Writing, On Writing Well, and The Lively Art of Writing, have helped me along the way. While I have a long way to go, it’s been a fun journey so far.

Through it all, it has become apparent that to become a good writer, I will need to become a good reader first. Every book on writing that I picked up, advocated reading, reading, reading. So I picked up some books in the mystery-suspense genre that I wanted to write in. Books by Dick Francis, Michael Connelly, James Patterson, and Lee Child filled out my reading list in both paperback and audio versions.

I not only devoured the stories, but I looked at the writing, the plot development, and the characters. Oh so the characters. I found that a compelling character made the book. And of all the characters that I discovered on my journey so far, one has stood out above the rest.

This character is Jack Reacher, an ex-military cop who weaves his way through Lee Child’s popular books. Reacher is a loner who always happens to find his way into drama. Reacher is smart and uses his powers of reasoning to solve some of the toughest crimes. The author has a way with words and each one of his stories has drawn me in. The keys to the success of these books are many, but three come to mind that set these books apart from so many other titles.

1. Compelling First Chapter. When you pick up a Lee Child book, you are immediately drawn into the story. From the first sentence on you are part of the action. Lee’s secret is to use short, quick sentences to immediately set a rapid pace. Here are a couple of first lines that show what I mean.

From his first book, Killing Floor.

I WAS ARRESTED IN ENO’S DINER. AT TWELVE O’CLOCK. I was eating eggs and drinking coffee. A late breakfast, not lunch.

FRIDAY. Five o’clock in the afternoon. Maybe the hardest time to move unobserved through a city. Or maybe the easiest. Because at five o’clock on a Friday nobody pays attention to anything. Except the road ahead.

Having a quick paced first chapter, draws the reader in. Lee uses a combination of sentence length to add pace and then follows up with more description.

2. Interesting Character: Jack Reacher is a compelling character because he has different traits than the average person.

The secret to making Jack a great character is the fact that he has almost super powers yet he comes off as believable. We have all met people with some of these abilities. The author just combined them into a very intelligent and trustworthy character.

3. Insightful Information: Reacher often mulls things over in his head. The author takes you along on the character’s thinking process and gives a very detailed picture of what is about to happen. Whether it be the outcome of a gun being fired, the reaction of a suspect, or the grand description of the workings of a car or truck, you experience the action through the protagonist’s eyes.

Overall, I think you’ll enjoy Jack Reacher if you haven’t discovered him before. If you are a writer, I think you’ll enjoy Lee Child’s writing style and character development. A great way to sample these books is to download the first two chapters for free and read them on a Kindle or Kindle software running on your PC or iPad. Here is a short article on the Kindle interface.

Question: Have you discovered the Jack Reacher series?