What is a hypothesis?

In general terms it’s an educated or best guess to a question. It’s what you think will happen.

For example: a simple hypothesis is based on four tenets

A hypothesis often follows a basic format of “If [this happens] then [this will happen].”

From this question a test could be setup to measure the actual effects of eating breakfast and making mistakes on forms. Research would be done and the outcomes calculated. The results would be posted and help us ascertain whether our hypothesis was true or not.

For our purposes in personal development, we can easily ask questions, form a hypothesis, and conduct experiments. To help you do this, I’ve created a basic hypothesis worksheet, and two specific ones you can use for collecting ideas and testing the outcomes. These are great for planning new projects and testing ideas. 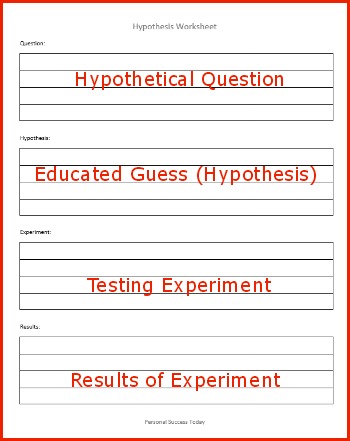 For personal development, you’ll find this sheet is almost like a blank canvas, with four areas to ask your question, devise a hypothesis, create a testing experiment and record the results. While you could do this with a blank sheet of paper, this gives you a quick guide to help you find results quickly.

In our next post we’ll look at some question/answer scenarios to setup your perfect Hypothesis and two specialized worksheets. You’ll see how asking the right questions and testing the answers can help you open the door to personal success.

Question: What hypothetical questions would you ask?