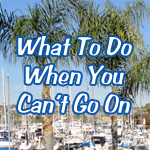 This last Sunday I participated in my third 5k run. It started inland on San Diego’s Shelter island and ended up along the big bay in San Diego. It was a beautiful sunny fall day, with just a few wispy clouds in the sky. The race was point to point, ending up at Humphreys by the Bay for a Champagne brunch to finish up the event. 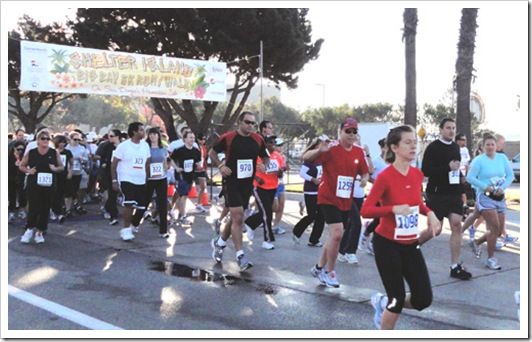 I started near the front of the pack, and started at a reasonably fast clip. As the race thinned out, I found some runners that seemed to have a comfortable clip and stayed with them.

The first mile was easy, and my time through the one mile checkpoint was great. As we turned the corner the sun was rising and you could see the masts of sail boats and the bay in the distance. It was truly an incredible day. I stayed with my running partners who were a little ahead of me.

As we turned onto the road that went along the bay, my side started to hurt. This is pretty normal for me so I just ignored it. I kept on pace and the run turned to the right, the sun now full force on my left side. I stayed with my running partners but they started to creep ahead. I was waiting for my usual second wind to come in.

As I neared the mile two checkpoint, they had a water station setup. The cool cup of water felt good, and helped get rid of the cramp in my side as I continued on. As I passed the two mile mark, something different happened that I hadn’t experienced before.

I ran out of gas.

My energy was suddenly gone.

It was if somebody had turned off a switch. This was really strange… in my previous two races the second half of the race was easier than the first. But with my faster pace today, I hit a block wall.

I pulled over to the side and stopped for a minute. My mind wondering what to do. The sun was full force now. I was hot, tired, and my legs felt like lead.

I continued on at a slower pace. Runners were passing me like crazy. I was dismayed and I felt like quitting. I kept going and I hit the u-turn at the end of bay drive and headed back for the finish line.

I stopped two more times, completely out of energy.

A guy pushing a stroller passed me up. I felt miserable. Why the heck was I doing this?

As I looked up, I saw something in the distance that changed everything. I could see the finish line marker.

There was something about seeing that banner that gave me a new lease on life. I started to run faster. I started passing people. I zeroed on that banner and ran faster and faster. I was in a full sprint now.

Somehow my energy was back, when the goal was in sight. I ran like I was in high school on a hundred yard dash. I crossed the goal line beating my previous time by two minutes.

I almost had given up. I almost quit. But I saw the finish line and everything changed.

The middle of the race is always the hardest. You just have to keep going. But when the finish line comes in sight, it’s all worth it.

I learned a lot that day. I learned to have an energy bar or drink before the race for more sustained energy. I learned that a racers checklist would be a good thing. And I learned that stopping and reassessing my situation was a smart idea. And most importantly… I saw the finish line and kept going!

Question: Have you had a similar experience where you felt like you couldn’t go on? What did you do to get through it?