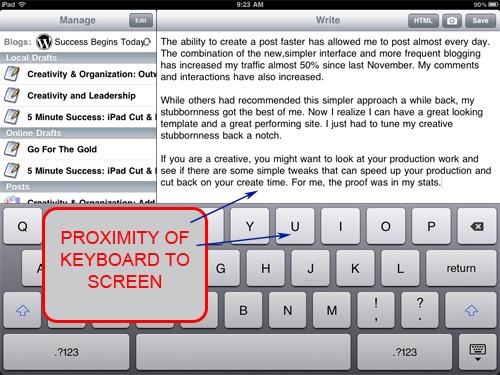 As a creative, I love to invent and modify things. The status quo can be boring, and I love to put my unique signature on most things that leave my desk. I’ve learned though, that my creativity is many times inwardly focused. I like to change things and do things MY way. While this may resonate with others, it often is just a distraction.

I’ve discovered what really matters is what customers think about my ideas and projects. The phrase “What’s in it for them,” has become my mantra. The hard part of an outward focus is determining what people truly want. You can do surveys, ask questions, or look at web traffic.

For example, in 2009 I changed my blog template to a new, more sophisticated design. I used rotating graphics on the front page to highlight new topics, and had smaller icons to highlight recent posts. I thought it looked great and I spent a lot of time perfecting the look.

Unfortunately, there were two problems. The sophisticated design, meant that I had to create two graphic files for each post. One was a large rectangle for the rotating banner and the smaller square one was for featured posts. This more than doubled the time I used to spend on blog posts.

The other problem with this design was it took longer to load. All of the rotating graphics had to be cached before the banner graphic was available. On my fast machine at home it wasn’t a problem. On a slower machine or phone, it presented a real challenge.

This had two direct effects on my blog. My posts dropped in quantity since they took longer to create, and my readers would click away because of the longer loading times. Here is the rub. It took me almost a year to really see the effects. Immediately after going to the template my traffic dropped off but I thought it was just a short term effect. I tweaked and fiddled with the graphics, and tried different pictures, fonts, and placements.

I was focused on the LOOK of the blog.

My readers were focused on content and load speed.

It wasn’t until two of my favorite bloggers, Michael Hyatt and Chris Brogan, went to simpler interfaces, that I decided to give it a try. I decided to use the Focus template from Studiopress, since it offered a custom layout for previous posts. This included the Genesis Grid Loop that many of the top bloggers have gone to. After spending a weekend on customization, I was ready to go. Immediately my traffic started to increase.

Then something revolutionary happened. I tried blogging on my new iPad 2. I downloaded the Blogpress application and set up my parameters. Within minutes I was typing away on the glass screen of the iPad. This is where the magic happened. I discovered that I was able to type up a post really fast. 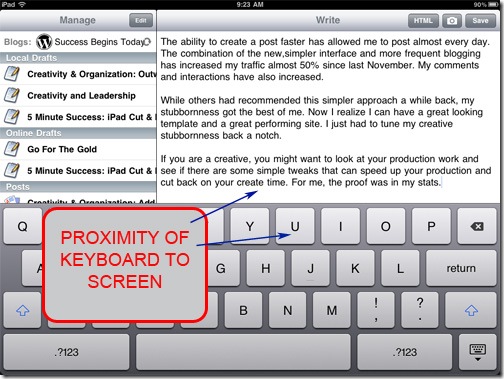 At first I thought it was just a fluke, but I soon found that the auto-correcting interface let me focus on the words instead of corrections. The iPad also let me see the results without taking my eyes off the keyboard. This was huge for a two finger typist like me.

The ability to create a post faster has allowed me to post almost every day. The combination of the new, simpler interface and more frequent blogging has increased my traffic almost 50% since last November. My comments and interactions have also increased.

While others had recommended this simpler approach a while back, my stubbornness got the best of me. Now I realize I can have a great looking blog template and a great performing site. I just had to tune my creative stubbornness back a notch.

If you are a creative, you might want to look at your production work and see if there are some simple tweaks that can speed up your output and cut back on your create time. For me, the proof was in my stats.

Question: Are there areas in your creative work that you can optimize?