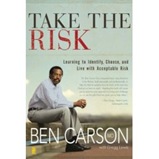 I picked up an interesting book the other day at the bookstore. It’s entitled Take The Risk by Dr. Ben Carson M.D. This book is written from a doctor’s perspective about taking risks in life.

The thing I found really interesting was Dr. Carson’s easy to use four step questionnaire for evaluating risk. He takes the risk in question and asks four things…

This is a best/worse case scenario with a twist because he asks the same questions in the negative… what will happen if I DON’T take this risk.

I have found these questions work very well from a goal setting perspective, especially the negative ramifications of not taking action on a goal.

Ben is a master story teller and he has a great story about growing up as a child in Detroit. His Dad left the family when Ben was a child and his mother was forced to move in with family in Boston for a few years. Ben and his brother attended a church school but the curriculum was quite a few years behind what he had experienced in Detroit.

When the family moved back to Detroit a few years later, Ben found himself way behind in school. He gives a striking example of just how tough it was. One day in the fifth grade the students were given a math test and they had to pass their tests to the kid behind them to be graded. The tests were marked and then handed back to the students. Then the teacher then went around the room and had everybody yell out what the scores were.

Ben tells of waiting in dread for his name to be called. The teacher called out “Benjamin” and he reported that he got nine out of 30 questions right… unfortunately he had misread the grade and the girl behind him corrected him… “Not Nine!,” she yelled, “He got none!”

As the classroom erupted in laughter, Ben felt really intimidated. He laughed it off but it really hurt. His mother soon found that Ben and his brother were doing very poorly in school back in Detroit. She gathered them together one afternoon and told them she was very unhappy with their performance. She announced that she was going to stay up that night and ask God what she should do about their sorry performance in school.

Ben and his brother had a hard time sleeping that night, and in the morning she announced that God had impressed on her that they were spending too much time watching TV.

She said “We’re going to turn off the TV, and from now on you can choose only three television shows each week… and every week you are going to read two books–you get to choose which books–and write me a report on each one.”

Ben and his brother protested loudly, but they didn’t want to disappoint their mother. So each week they went to the library and read two books as she requested. Ben read books about things he liked. First it was animals, then plants and then on to rocks.

One day in science class the teacher held up a black shiny rock and asked what type it was. None of the kids in the class had an answer… but then Ben, having just read a book about it, held up his hand and told the teacher it was obsidian. And then he went on to describe it in scientific detail.

Everyone in the class was surprised. The kid they referred to as “the dummy” was spouting off words as if he was a scientist.

That day Ben Carson realized he wasn’t a dummy after all, he thought…

What if I read books about all my subjects? Then I’d know more than all these students who have laughed at me and called me “dummy.”

Starting that day that is just what Ben did. He set himself a goal to be a lifelong reader. Within months his grades improved and his dream of someday becoming a doctor slowly came to fruition.

Today Ben Carson is a world renown Neurosurgeon performing complex surgeries on the brain and spinal cord. All because his mother was willing to take a risk.

She turned off the TV and sent her kids to the library. She found that the risk was too high to leave the TV on… and she was right.

Be sure to pick up the book Take The Risk and be inspired. This is one powerful book that can help you take the risk necessary to achieve your dreams.