The TV show Dancing With The Stars was a great study in crowd reaction and judging dynamics. From week to week you could see some of the top dance performers try different things to get a top score. From colorful outfits to intense music, plain was out and excitement was in.

I really enjoyed the colorful costumes and the incredible dance moves, yet it was also important to get all the steps right. A performer could wow the crowd with a jump or spin yet be marked off for lifting a foot off the ground. It was really important to put the entire package together. 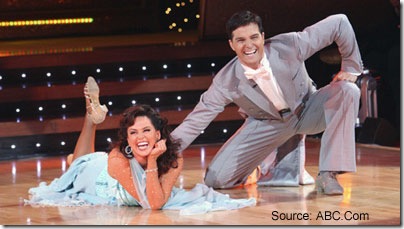 Marie Osmond and her partner Jonathan Roberts, put together many incredible performances over the many weeks of the show. Marie is an entertainer pure and simple. What she lacked in dancing skill she made up for with flash and personality. At 48 years old she did an amazing job with jumps, spins and other very difficult dance moves.

What struck me though was her freestyle dance in the final round. Marie played a doll in her dance, and went from lifeless and limp to semi animated. Only in the final few seconds did she come fully alive. While the dance was creative and different, it just didn’t work. The audience and judges panned the performance. Instead of using costumes and excitement to reach outside the box, she used acting skill and emotion.

Marie’s dance was too different.

The judges didn’t know what to do with it and the audience had a hard time understanding the context. Marie put the dance together to reach out to her many fans that like her doll collection, but the general audience was lost. Her dance would have been perfect in a stage play where the context could be fully explored, but it didn’t make much sense in the 90 seconds she had in her stage performance.

I have had similar experiences myself. As a speaker in Toastmasters, I have competed in many speech contests. I always like to add some creativity to my presentations, yet sometimes I go too far and lose my audience. My presentation makes perfect sense to me, yet the audience becomes quickly lost.

This phenomenon can be referred to as The Curse of Knowledge.

This is actually a pretty simple concept. You know all about a subject or item and in your mind your facts and performance makes sense. Unfortunately your audience does not have the same knowledge and the performance fails to connect.

Chip & Dan Heath explore this fascinating concept in their book, Made To Stick. They make the point that instead of dumbing down a message, you need to find a universal language to reach your audience. And this language needs to speak quickly.

Dancing With The Stars was a great example of that. Many of the costumes that performers wore were instantly recognizable. As an audience member you quickly recognized the context and could understand what was going on. Marie did an great dance a few weeks earlier dressed in a 1940’s uniform. The dance came alive immediately, because everyone in the audience could relate.

Unfortunately, When Marie played a doll, it was difficult to fully understand what was going on. The dance started off slow and only came to life in the last few seconds. The performance lacked excitement and left you saying to yourself… what was that all about?

The bottom line is simple… For a speech, a dance, or other live performance, put yourself in the audience’s shoes and make sure you can understand what is going on. If you can’t tell immediately, you might want to consider something more universal.