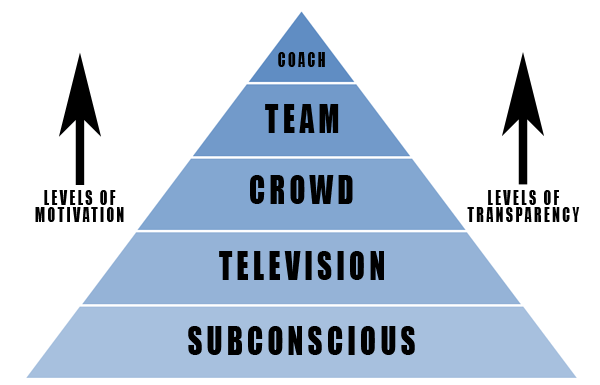 When you set a goal, the difference between success and failure often comes down to one simple factor. It’s simply how motivated you are to complete the task.

When we look at motivation, I like to use a Football analogy. Take your average pro football team and your average player. What will motivate that player to success? In the graph above you can see the relative levels of  motivation. They are in link step with how transparent and accountable you are.

There are five levels listed

Let’s look at how these line up on our Goal Chart from yesterday’s post.

Our expertise makes our tasks easier over time. The more we know, the more likely we are to move to success.  As we can see the danger level is in the focused area in middle.  I’ve been here so many times in my life. I get started, dead focused on the task, but I’m unable to finish the project because the level of complexity made it much harder to do than I expected. Motivation waned, and I usually gave up. For success, I really needed to bring in others and use their expertise and motivation. When I’ve been part of a team, or hired a coach, the project usually gets completed.

The low end of the graph is where simple habit change comes in. The simpler the change of routine is, the more likely we are to see success. When I have made simple changes to existing habits, they work almost like magic.

Let me give you an example of  both ends of this graph and how they affected me.

Back in 2008, I set a goal to write my first fiction book. I had never written fiction before, so to complete the writing and get a finished book would take a lot of motivation and expertise. Here is how it worked out for me.

The first round went rather well. I had an ingrained habit already created of writing from 4am to 6am. I just changed the habit from writing blog posts, to writing fiction.  At first it was a little clumsy, but I learned quickly along the way. My first draft was OK, but certainly not where I wanted it. This is where the project would have stopped had I not brought in a writing coach.

The second round went this way

My takeaways for developing a successful goal setting strategy.

Bottom line. If you have a difficult goal you want to accomplish, make sure you bring in others to help. It may be a coach, small group, mastermind, or leadership organization.

Tomorrow we’ll take a look at the bottom end of the graph and see some amazing ways we can change existing habits to do amazing things we never thought possible. We’ll compose some Blended SMARTER Goals. Stay tuned.