Why is goal motivation so hard? I’ve been setting goals for years and have written about goal setting extensively. I’ve also written and published an eBook on goal setting, but through it all I have had one nagging problem. 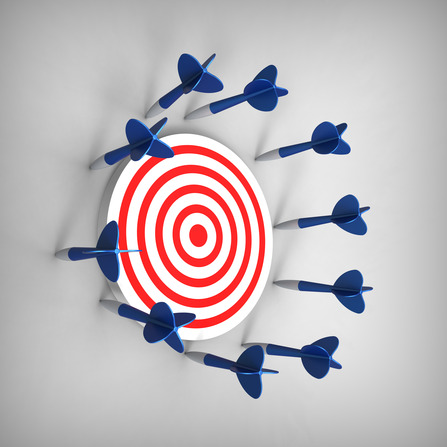 Goal setting only worked part of the time. I’ve had some amazing, almost impossible goals come to fruition. Yet I’ve had very straightforward SMART goals, laid out to the tee, fail miserably. I’ve also had very simple goals work like a charm, but others seemingly easy ones fail in just a few days.

It always seemed to me that really hard goals worked, and also very simple ones. It was the ones in the middle, the well planned out ones, with a complete plan, that crashed and burned. It wasn’t until I ran into some goal setting research by Stanford professor, Dr. B. J. Fogg that things started to make sense. Once he put up a graph it all clicked. This simple visual showed me clearly what I had experienced for years.

Here is the graph… 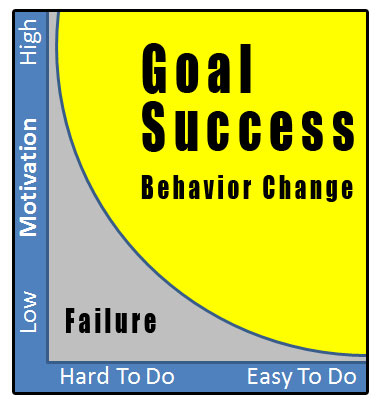 The vertical axis represents motivation, from low to high. The horizontal axis represents how hard something is to do, with a declining scale from hard to easy. The yellow represents successful behavior change, while the grey is the failure area.  As you can see from the graph, there are two areas almost touching the axis. They are…

The middle grey area is the tricky part. If we set a goal to do something very difficult and don’t have enough motivation, we will fail. Conversely, if we have a lot of motivation, but an unchallenging task, we will fail too.

This is exactly what I have experienced in my life. When I have worked with a coach or other motivator on really tough challenges I have seen incredible success.

Here is a short list of some goal motivation successes I have experienced.

Conversely, I have also experienced great success by making small changes to an existing routine or habit. (SMARTER Goals)

Here are some of my goal failures. Great intentions, yet in the grey area.

I wish I would have had this graph and knowledge years ago. I have wasted considerable time and effort in my life in the grey area. With just some simple tweaks almost everything on my failure list could either have been avoided or modified for success.

Looking at the list above I would make these simple changes

Personally this graph is one of the most enlightening tools I’ve run into in my eight years of blogging. It answers a lot of questions I’ve had and will ultimately help me make better decisions. Tomorrow we’ll look at a powerful Motivation gradient and see how it can be plotted accurately in this graph. The resulting chart will allow us to accurately set goals and ultimately plan out our success. Stay tuned.