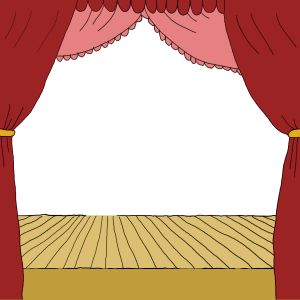 Imagine yourself in a small intimate dinner theatre. The brightly lit stage is small, holding four actors at most, but the audience area is very large. Up above the stage is a small booth where the director of the event sits. He can see the whole auditorium and be aware of anyone coming and going.

As the play starts, the director guides audience members one by one up to the stage. There are skinny ones, moderate ones, and really chunky ones. The play starts with a skinny actor, reciting the title of the play, then another skinny actor comes up and recites a quotation. When these actors are done, they quickly return to the audience.

As the play goes on, a moderate sized actor comes up and makes a main point, which is quickly followed up with a large chunky guy telling a story. As soon as the story is over another moderately sized actor comes up and recites point number two. And so it goes. The director guides the actors on stage smoothly and in the proper order and the play goes on smoothly without a hitch. While all of this is going on, there is another actor off to one side of the stage interpreting what is going on and broadcasting it in another language.

This is how your mind works giving a speech. The stage represents the conscious mind, which is controlled by a part of the brain called the Prefrontal-cortex. The audience area is your long-term memory, controlled by the basal ganglia part of the brain. The director controls how the short term and long term memory interact. The actor who is interpreting is actually the motor function of the brain that turn your thoughts into spoken words.

In a well rehearsed speech, the conscious mind brings in long term memory ideas one by one. A small thought might be a title or quotation. A medium sized thought might be a main point and a large chunky thought might be a story or illustration. The director brings the ideas on stage in the proper order and if proper preparation is done, the play goes smoothly. As the play unfolds, the interpreter translates these thoughts into an effective speech.

Let’s take this same scenario and add Powerpoint to the mix. Let’s start with slide number one. A skinny actor comes on stage and recites the title of the presentation. Now the director calls another actor on stage to advance the powerpoint slide. Now an external actor comes in from outside and tells everyone what the powerpoint slide looks like. Everything now stops for a minute. The director now has to find an audience member who matches the slide. The director calls two actors on stage, one matching the picture of the slide and another that matches the text. Now we have four or five actors trying to crowd on stage at the same time.

The new actors recite what they know about the slide and then the actor who will push the button on the remote is called back up. Now the button is pushed, but no actors come in from outside. The button is pushed again, and still no actors. The director is now frantically trying to find someone to come on stage. He calls up an excuse actor that starts rattling off excuses. Another actor called sweat is called up to cool things off as the stage is getting very hot. While all this commotion is going on, the translator actor is really having a hard time. When he is not getting input, he reverts to Um, Ah, and You-know as default words.

As you can see, with Powerpoint, there is a lot more going on on the stage of your mind. It doesn’t take much to overload the stage and have all sorts of commotion going on. Since the stage is small, you have to really practice and coordinate a lot of actors to come on the stage in the proper order. Powerpoint presentations are tough.

This stage metaphor is from a great book called Your Brain at Work by David Rock. This book goes into great detail into the functions of your mind. It has really given me greater insights why Powerpoint is so difficult to do right. I suggest you pick up a copy before your next important speech or presentation. It will really help you understand your mind better and also help you interact with your audience in a more effective way.

Question: Have you found an effective way to give Powerpoint presentations?