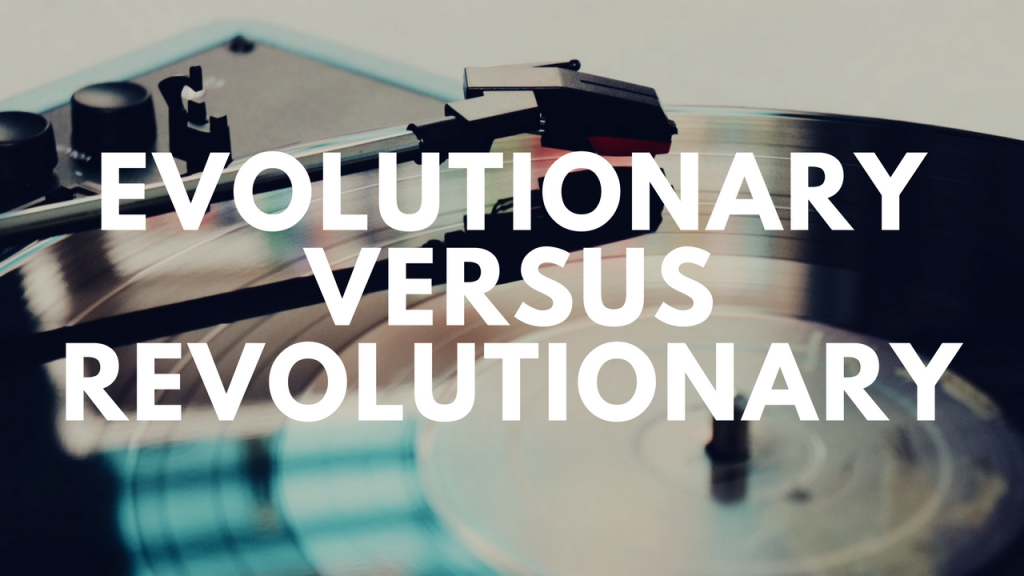 I was brainstorming some ideas the other day for an upcoming ebook on goal setting and was trying to come up with words that expressed the difference between standard goal setting and setting goals that are truly life-changing.

After trying many different word combinations, two words remained on my paper. Evolutionary versus Revolutionary. Evolutionary being the small incremental changes that many goal setting programs expound. Set a goal, and when you meet it, bump it up another 5%.

Many sales goals are set this way. Set a quota for the salesperson and then incrementally increase it month after month. When I was in sales years ago, I faced this dilemma on a monthly basis. It worked OK until you didn’t hit it one month. Then it was almost like a noose around your neck. The excuses came and the quota became a demotivator.

Revolutionary goals are a different animal. Instead of a small change, the goal takes things to a new level. The whole process is reviewed, ideas brainstormed, and a new approach taken. The status quo is thrown out and a new process brought in. Goals like this can be scary, and the risk can be high, but the payoff can be profound.

In my life, I have experienced both types of goals. Evolutionary goals at best result in small consistent improvements. But unless the approach is modified over time, the results soon flatline. Revolutionary goals, on the other hand, can have an exponential effect.

To give you a real-world example, let’s take an example from the PC world. Microsoft vs. Apple. Microsoft is one of the most evolutionary companies on the planet. They usually start with an idea someone else has come up with and modify it slightly. They put their marketing muscle behind it and make incremental changes over time.

Take Microsoft Word for example. It has incrementally changed since the mid 90’s. Each new update brings a new feature or two, but Word 365 is fundamentally the same as Word 97. Sure it has a new ribbon toolbar, but it works in almost the exact same way as it’s predecessor. It has basically become a commodity. And commodities soon go to the lowest bidder.

Apple, on the other hand, has come out with many revolutionary products. Walk into one of their stores and be wowed with innovation. Starting with the Macintosh back in the 80’s almost every product has set new ground. There was the iPod, the iPhone, and now the iPad. Each one selling out with store lines around the block. Revolution done right can have incredible results.

When setting goals for the future, you can take either approach. Will you be like the mainstream crowd, take the status quo, and go for small improvements or will you take a revolutionary idea and run with it. I would argue for Apple’s approach. Do something revolutionary and then make evolutionary changes.

Evolutionary versus revolutionary, that is a question most businesses need to ask. Do you play it safe a make a micro change for the new year? Maybe a tweak here or a slight change there. Or do you go big? Scrap the old and come out with something that no one has seen before. Do you burn the ships and go for it, or resort to that incremental change?

Question: What revolution do you want to start?