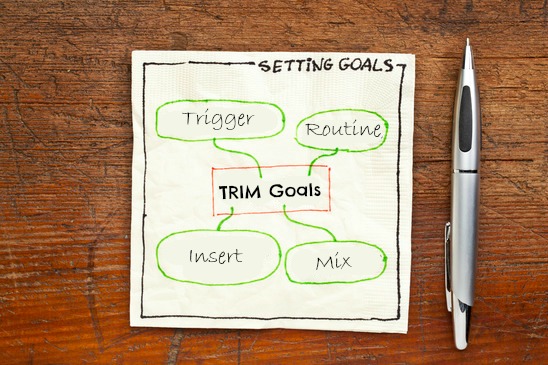 Habits are tricky things. Many of the activities we do every day are because of ingrained habits. In many cases we don’t even realize we are doing them. Good or bad, we do them almost automatically. This is where the real power of habit change comes in.  Knowing how they work will empower us to change them for the better.

The three parts of a habit are…

Example: You get in the car in the morning (Trigger), You turn on the radio (Routine) to enjoy music on your drive to work (Reward).

Figuring out the triggers and rewards can be a challenge at times, but for our purposes here let’s look at some easy triggers

Now that we have seen some triggers, let’s look at three important facts about habits and see how they work.

With just these three simple pieces of data we can construct a system that let’s us maximize an existing habit or routine.

So let’s blend-up a couple of examples.

Positive action statement: When getting in the car in the morning, I will make one important bluetooth sales call and then listen to engaging business oriented audio books.

Positive Action Statement: When going to Starbucks I will talk with people in line while waiting for a hot coffee.

Modifications: Found that I missed the whipped cream on top of my drink. Started ordering black coffee with whipped topping and added cinnamon to make a delicious drink with only 15 more calories. Found it was easier to build a conversation if I had a business card, book, or other item with me.

New Blended Statement: When going to Starbucks I will engage in interesting conversation with people in line while waiting for delicious hot coffee with whipped cream and cinnamon.

New Outcome: Basically the same but much more enjoyment along the way

Change Your Life: This new blended habit system is easy to follow with my TRIM Goals Plan.

Outcomes: Maximize your existing triggers and add new ones. Easy to create routines that lead to success.

Set a Goal With Our Free Goal Setting Tools