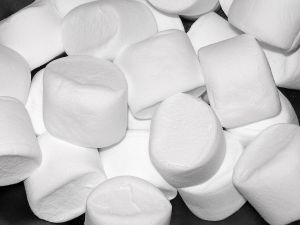 I received a couple of interesting replies to my previous post about the profound little book, “Don’t Eat the Marshmallow Yet!

” by Joachim de Posada, that raised a couple of interesting questions. The premise of the Marshmallow book is based on a landmark Stanford University study of children who were left alone in a room with a single marshmallow on a plate. They were told that if they didn’t eat the first marshmallow they would be given another one in fifteen minutes. The study traced these kids for ten years after the initial period and it found that kids who were able to resist eating the initial marshmallow were significantly more successful than the group who ate the marshmallow. Delayed gratification seemes to play a significant part in the lives of successful people.

Is it possible that some of the most successful people in the world are also the most impatient? Some may choose to eat the marshmallow and then go and locate more marshmallows somewhere else, in a quicker amount of time than those who wait obediently for the reward to come to them!

I have worked with people like this over the years and they seem to have one thing in common. They have a vision of a grand marshmallow. They aren’t content with regular ones but see a bigger and better one on the horizon. They will do whatever it takes to get there. From my experience they are always buying and selling marshmallows. They may come to you and ask to borrow a marshmallow or two. Marshmallows never stay on their plate very long but their vision drives them forward. They may borrow marshmallows on their credit card, from family members and friends.

They usually end up with the Mercedes of Marshmallows but many times in huge marshmallow debt. Have you ever witnessed marshmallow repossession? It’s not a pretty sight.

Years ago when I was managing a small Mercedes/Volvo repair shop we would have Snap-On and other tool guys come into the shop on a regular basis. They had huge trucks full on tools and equipment. Most of these guys were very motivated small business owners who had a lot on the line. Most had mortgaged their houses to buy their trucks and start their businesses. One tool guy stood out above the rest. He had a huge Snap-On truck and top of the line everything. He talked about his brand new Porsche in the driveway of his hilltop home. His motivation in life was to buy a very expensive thing and then sell, sell, sell to pay for it.

He was usually number one in sales in his division and everything he had was shiny and beautiful. The problem was he didn’t own anything. All the “marshmallows” were borrowed. I remember one February morning he came in and talked about the $100,000 pool he was putting in his backyard to “motivate” him to reach top salesman for the year. It had a waterfall and a huge slide. We were all impressed with the picture he brought along and realized we were helping him realize his dream as he handed us our tool bills.

The next week he came in and he looked like he had gone over the waterfall. He had just been notified by Snap-On that his territory was being cut substantially and he would not have our shop in his territory anymore. His sales would drop slightly until he was able to develop new customers. Suddenly those borrowed marshmallows melted into a blob of incredible debt. His prized Porsche and other golden marshmallows soon disappeared. The lesson here may be… A marshmallow on a plate is worth more than a bunch of marshmallows in someone else’s bag.

Reader Mike T asked the question… when is the best time to eat the marshmallows? That is an interesting question and one we probably all struggle with. Joachim sums it up pretty succinctly in his post parable analysis…

The true secret to marshmallow success is knowing what you want and keeping the end goal in mind, and doing whatever it takes to achieve your big marshmallow dream rather than gobbling all the mini marshmallows along the way. True sustainable success can only come with patience, perseverance and a steady eye on one’s long-term goal.

The answer seems to be… what size is the marshmallow? Is it a miniature imitation or the real thing?

When I was thinking about the whole premise of the marshmallow study I couldn’t help think about what marketing guru Seth Godin (author of Purple Cow) would think of the whole thing. I can see the premise being changed slightly… you have two marshmallows on the plate, one is plain white and the other is purple with exciting sprinkles… you can only eat one… which one would you eat?